Diwali- Then and Now

Here is Anushka's second Diwali pic when she was about 15 months, in 2006. 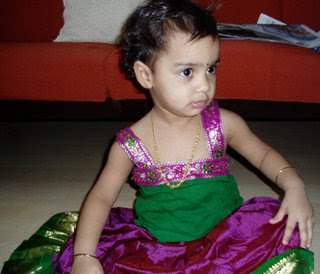 I wanted to dress Aditi up in the same outfit. Since she has new ones for trow, I thought I would do it today. 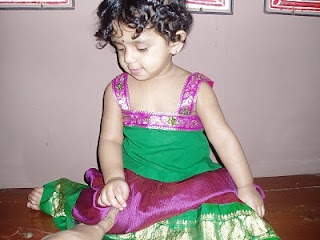 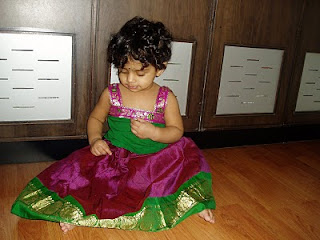 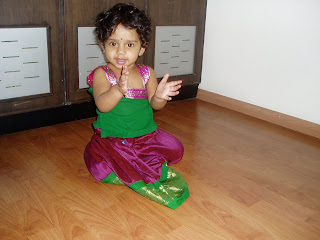 Pretty similar and yet unique aren't they?
A couple of years ago Anush had painted diyas and we had gone on a spree. I am unable to trace those for use t'row, though I had set them apart this Kolu at Dassera. Anush does not seem bothered about it. She is excited about getting to do diya painting in school!
My bookswap books have been received by my swapmate in the US. Am I glad they enjoyed it!
Posted by Artnavy at 11:05 AM

ahhhh. aditi looks lovely. Like u say.. same same yet different :)
Painted diyas would be perfect for my nov artsy-craftsy.

Love the pretty pink pavadai. Both kids look so cute :)

Happy Deepavali to you!

Lovely they both look! And Art...only u can do this!! The same pavadai at the same time for the same occassion!

- Pretty :)
- Aditi's curls happen to be the only difference I can spot :D
- Can't wait to see the gals in their diwali outfits
- Happy Diwali Art :)

Yeah, just the hair looks different. Both of them look lovely in their own way in this outfit, and so nice you've preserved it so well :)

They both are so cute!! Kala tikka

Wishing you all a very happy and prosperous Diwali ~ Dimpy D