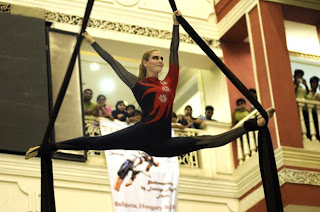 Anushka's mother is extremely fond of viewing gymnastics on TV or live if possible.

When she came up on the ad for Trapezia at the Citi centre she decided that Anush had to go and see it. Paati took Anush and boy, were they mesmerised.

" Amma they did so much gemanastics. One aunty and uncle went up and down a curtain and turned- like this and like this ... like they were flying in air...then one uncle or aunty in a skirt went round and round and danced so long... round and round ....i enjoyed myself amma!! ..... you kept any surprise ready for me at home??...." 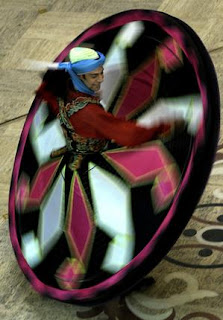 I have seen Tanura the Egyptian dance which leaves u in a trance like state but not the rest from Hungary and Belgium. The latter reminds me a lot of the our desi mallakamba and rope yoga . 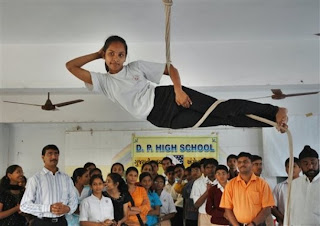 If you are a Chennaite, do catch it.

Anush has promised to take me to it later when Aditi grows up.... in a few days!
I forgot to give a camera to my mom and Anush. Next outing of theirs I will remedy that.


Pics courtesy google and Thehindubeta
Posted by Artnavy at 9:27 AM

Lol...if only babies grew up in a few days! Amazing pics..love 'gemanastics' meself. Only wish I could put my kids into a class for that.

was it grandmother in the first sentence art...

I love them too..

oh! even me love gemnastics!!

and this show seems totally awesome!