Went to Giri traders in Mylapore and was mesmerised by the sheer variety in puja saamagri- had been there on work to collect agarbattis. Besides that I managed to find the Basics of Carnatic music (Sarali Varisai/ Geethams) in English to begin teaching Anushka. She is very averse to joining the class that is conducted in our apartment. Rather than force or coax her, I decided I could teach her for a few months till she is ready to enroll somewhere.

Also got her a set of Deity stickers to make her own scrap book so that she familiarises herself. She loves saying Ganesha and Hanuman ( thanks to the movies?) and seemed familiar with "Allaah " Could be because this was the first "God name" she had heard each day, at the mosque near our house in Mumbai, where we spent a few months, soon after she was born. 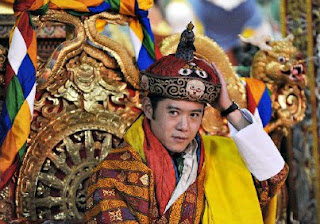 Premonition, ESP or what? Maybe shows my lack of being updated on news. I mentioned I liked the previous King of Bhutan in yesterday's post and I see this today in the paper- front page. I swear I had not read anything about Bhutan, let alone its royalty, in the last one month at least. 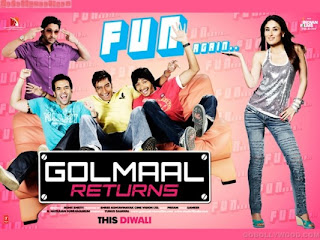 Saw Golmal Returns on DVD last night and am embarrassed to admit I liked it - over the top, mindless PJs, often tasteless humor. Bonus points because it spoofed the TV soaps which I detest. My only grouse was why would no mute person raise in arms against the lovable but caricatured version played by Tushar Kapoor. Before you go off to get your copy, let me tell you the rest of my family dozed off in the first few scenes itself.
Posted by Artnavy at 9:40 AM

The new king looks handsome, eh?
He's all of 28 & I have seen him in flesh & blood when he was just a small shy boy.
My husband has been asking me to to see Golmaal. Guess I'll give it a shot. :)

there is this CD called 'hanste gaate gana seekho' for intro-ing kids to music, a huge hit around here. its hindustani classical music though.

also a batchmate's wife runs this site called raagarasika.com, you might want to check it out. lemme know if you need more gyaan, i can put you in touch with her - she might give pointers for more kid-friendly stuff for teaching carnatic music (she has two kids of her own so might know).

monika.ansh- i saw his siter, the princess, when we were in Bhutan, at a cafe. She looked lovely and so unassuming

oh well! i saw Golmaal 2 times in theatre!! and should i also confess i liked Kya Kool hai Hum with its double entendres?

i think i will give golmaal returns a shot in any case! :D

ps: no stories of Bhutna because we have been ODing on US elections for sure! :D

Golmaal Returns means tolerating Kareena kapoor for a while. So not my thing! but glad u liked it.

we have some stores in blore which stock up pooja samagri and i know what u mean....it's so amazing. i don't even know what they use half the stuff for! unfortunately, i don't pray as often as i'd like to :(

I heard the marapachi dolls in Giri trading were very beautiful. My mom has been trying to make me get some. I just haven't had time to pop in there so far.

Oh, and we bought the gheehappy book you'd mentioned before. It is mostly for little children - they only have one page for each deity. Illustrations are too cute though.

I saw Saifeena (errr...funny though) on stage at the delhi marathon a few metres away from where I was standing..I never thought she looked good...but on stage she was looking cute. And they were playing all of her Golmaal numbers..but now I am not going to watch the movie.

watch at your own risk okay? as i said the family dozed off