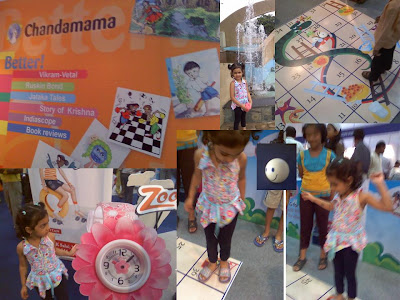 Saturday, the three musketeers, Anush, my mom and me, went to the KideX 2008 ( by CII) an exhibition at Chennai' s Trade centre. Very well put together, with a huge variety of stalls- books, writing instruments, toys, CDs, games, art colours, wall colours, apparel and so on. Apparent consumption has gone up for this generation and how!!Chad Valley from the UK is being marketed by Spencer's and I ended up spending a tonne of money there. But completely worth it- more on this trow.The stall by Tumbi/ Mango- DC books also must have thanked their luck that I visited and got Anush stories way beyond her current requirement. But they have a good collection indeed. More on this as I read them to Anush.I met the amazingly witty GB who works with Chandamama and who was the main reason Muthu made it there. GB drew my attention to the Muthu illustration on one of the stall walls!! I met the illustrator as well. Wow, to have such talent !Btw, they are looking for creative writers( full time, Chennai). So mail me or let GB know, if you are interested. My mother's current employer, TWWI, had an innovative stall with verb/ noun sorting and a complete the story board- each contributor being allowed to add only a phrase.The Inca hammocks were pretty and they had specific ones for kids.There were the mandatory popcorn and cotton candy stalls. Of course a Dora stall which had no takers since it was supposedly "licensed" products which meant it was hugely expensive eg Rs 1k for a bounce ball!I am looking for an India map jigsaw for Anush which was not available. Let me know if you find it.

Best of all, Gold Winner oils had set up a large floor level Snakes and ladders and Anush won in 5 throws. She made it to all the ladders and got none of the snakes. Hope she is lucky as this always.(. - Kaala tikka)

We went to Savera for the Rustic Food festival and were not disappointed completely. The Akki roti and Kara Avalakki were superb. The rest was average fare. Anush had fun with the killi josiar though and went about calling it "not birdy amma- parrot- killi- mittoo".

There is a chaat shop outside Karishma in Nungambakkam- excellent pani puri and fairly good jal muri but you can request for less turmeric. The sev puri is excellent and they use fine sev- a rarity in Chennai

BTW you can visit MetroMela for interesting reviews of your city's hot spots. Why do i say that? Because I have begun reviewing there!!

I leave you with some recent Anush speak:
"Amma let me complain to you" and "immejetly" corrected herself and said explain to you
"The colours of the ( hand) windmill ( kaathadi) are mixing- it is an illooshun "( illusion)
You have "almost" finished?, "almost" reached there?


This line is "vertical"" possibly"

Saw Dostana and loved it despite the stereotyping and caricaturing of gays. Just reinforced my feel that Abhishek rules and John has replaced Arjun and Hrithik in the Artnavy hot bod charts .

Chad valley - Woolworths ka brand, which btw is in very bad shape at the moment in the UK. Possibly looking at expanding elsewhere, what better place than India - loads of kids and pots of money!

LOLing at 'complain' for 'explain'.
This friend was once asking n3 and me to join them for lunch at an Italian restaurant after school. Her kid (about 3 yrs old at the time) said to n3,'You should try the macaroni pasta there. I exist n3, I exist. You really should'.
Took us a minute to realise that he meant 'insist'.
Tragically this priceless phase goes away as they get older.

Will keep looking for India map puzzle. You could try any Montessori equipment supplier. They're bound to have one, might be pricey though. The one I got from Channapatna was for 400 bucks, the Montessori guys sell theirs for about 2000 bucks.

monika.ansh- yes it was nice and not too crowded since we went in early

Pattachitra on a ball - wow! Where did you pick that one from? beautiful!

these guys dont know what lovely stuff they have

I am truly amazed by your energy levels (I know I have said this before),attention to detail and also how much you can cram in one post.Half the time, I dont even know what to write about and you seem to have too much to write about.
Anuh's art work looks great !and so does the ball art.

some stuff is for the record for posterity

yet again a full weekend!! wow!! with so many interesting things added! sounds like total dhamaal!!

and me saw dostana too and loved it! and yes John is way too hot to handle! was glad to get some eye candy for the women!! ;)

hi - found a india map jigsaw at sapphire toys bangalore today. this is a cheap (only 40 bucks) one on hard cardboard. not fantastic but not bad either. tell me if you want i could send it to you.
d