Here are the remaining Hindu Music Festival 2008 reviews from the patriarch of the Artnavy family:
"There is no doubt that both Bombay Jayashri amd T M Krishna are "acclaimed award winning solo performers". Their joint concert held for The Hindu November Fest, was billed as a hope of the vocalists "...to establish a dialogue between their styles...". This was largely belied. Krishna's style was almost imitative of dhrupad where as Jayashri was keen to experiment throughout the recital. One can understand regular artists' boredom with singing the same things everyday, but what is often forgotten is that for each audience it is a rare event. They want to hear what the artists are best known for. The earlier generations of Carnatic musicians did not wish to experiment much and their audience was also not ready for innovation. This is not true of the modern artists and audiences. But one cannot run a full concert on experiments alone.
The Thomas Siffling Trio are a competent professional group from Germany. There was nothing to fault their jazz performance from a technical point of view. Now-a-days it is rare for an artist not to talk to the audience. This certainly builds up rapport and enhances the enjoyment of the performance. But one wishes they had not attempted to converse with the audience in English, a language they did not seem comfortable with. Their attempts at humour only received polite responses.
No one needs to teach Shuba Mudgal to handle the audience. Both she and her musicians performed well. But her experiments with the classical form, in the first half, were only partly successful. For the second half of Indi-pop songs, she used pre-recorded music tracks. This attempt at Karaoke does not go well with our audience who like their meals and music to be cooked from authentic ingredients as they sit down to relish them. "
*************
There is a Tribal handicraft exhibition on at Sankara hall. I have not yet been to it but my friend says it is not run of the mill .
*************
Not many bosses would remember a long given promise and make sure to get it as well: 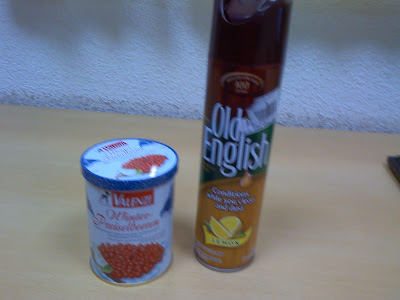 art the ball art is too cool.

Just saw the Pandhu Chitra. Very nice! And, where did you get the wood polish spray? anything similar available locally?

Hey! haven't dropped by in ages! Anush's GROWN- taller and prettier! :-D And I love the new (is it old by now?) look of your blog. The ethnic print is totally cool! :-)

DC- my boss got it for me!! from Spore- try amma naana opp park sheraton in chenni