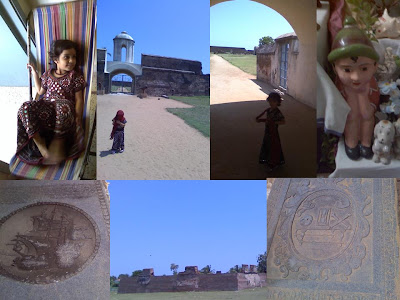 My parents' old friends live at Kalpakkam. A very pretty township, it was hosting Durga Pooja celebrations since there is a large Bengali community there. While we spent a little time to observe some of the birds which flock there to the marshy back waters, we also noticed some fisher folk who seemed to be catching fish with their bare hands!!
I took Anush to a 400 year old Dutch fort in Sadras, just adjacent to the Kalpakkam beach . Sadras, was initially a weaver settlement which the Dutch took over. Being a port, it helped trade the famous muslin cloth. The British later attacked this fort and took over it.
The approach was crowd free and Anush rejoiced in the company of some adorable goat kids , trying out their bleating, stating that the chocolate brown one was her favourite.
We were welcomed into the fort by cannons, luckily without the fire. While the main gates were open, the one to the cemetery was locked. A very receptive " maid" volunteered and fetched the caretaker/ guide who willingly shared the stories in the hot afternoon sun.

First we went to the cemetery ( of employees and soldiers of the Dutch East India Company) where a dog, a magician, a sailor rested along with some illustrious families. You can read the pictorial inscriptions on the tombs and wing your imagination to weave stories of those who lie six feet under. On a more sombre note, the cemetery is also visited by some Dutch families who come in search of their ancestors.
We saw ancient walls that were over 3 feet thick, a secret room/ chamber and centuries old, a broken pillar which looked straight out of Indiana Jones , an old well which had been reinforced ..... There were the remains of a bar, a granary . We were told that there was secret tunnel that lead all the way to the sea... should have been about a kilometer long then!
The ASI is still excavating and trying to restore the fort. Here is an old yet not outdated piece on the excavation and the finds there on.
While the Sadras fort is neither intact nor terribly grand in scale ( at least as I expect forts to be) , the most exciting part about looking at any piece of history is the stories that you can imagine around it. Since there are so many "fill in the blanks" ....
Rather like The Other Boleyn woman by Phillipa Gregory- a really fast paced masaledaar romantic novel with a historical thread running right through.
Posted by Artnavy at 10:25 AM

Thanks for the input interesting.

so much happened over one week i was away!! i loved khosla ka ghosla! one of those multiple views movie!!

and all those golus look absolutely wonderful!! i had no idea something like this is also done during navaratri! for me navaratri was just garba! that too something we would WATCH from our terrace!

whoa art. you should author a book on what to do in and around chennai. givvup only on your enthu levels!

navy excels in the art of chilling out and sleeping :-))