Fish and some more 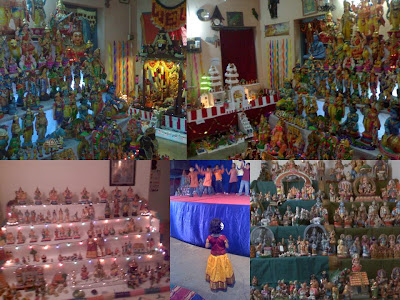 We saw The Aqua show and the queue was as long as at Tirupathi. Well almost. Anushka's delight and wonder made it worth the wait-
" Amma this has giraffe spots"
" ... so funny- it has a cap" followed by giggles
" This one has whiskers like a cat"
" Just like Nemo , no?"
Also, instinctively she thought eels were dangerous.
She wanted to take a fish home but as usual I had to refuse. No pics since photography was prohibited.
ASAP and Masquerade came together for a performance " Comickaze" which we went to on Sunday. The ASAP part of it comprised of 2 minute comic episodes which were hilarious and well executed with a lot of cavorting around. Anush laughed each time the audience did and I was sorry to tell her to laugh softly (was anxious that due to the time lag her laughter would stand out) . She "chased" the " black shirt uncle" ( one of the actors) all over the ground during the interval. She must have been his youngest fan. I did not follow the Masquerade play which I saw only in parts due to Anush's restlessness since it had too much dialogue.
The Golu Gala continues-
Minka's well laid out against white paper in her amazingly spacious flat was delightful. Her apartment was also hosting a Golu and a Navaratri ganaa- show shah, with kids and grown ups participating. Got a glimpse of that and was transported back to Mumbai.
We went to a couple of Golus at my old building - an elderly couple who were very proud of their display and the fact that they had used suitcases and boxes for additional steps. And then the stay at home archaeologist who got me to sing - not one but two songs. She said that I had inspired her to resume learning music last year ! Anush was mesmerized by the veena which the host had and another guest played for us.
There was one at Navy's relatives place which took up their entire drawing room. There was a Ramayanam theme against one wall, a zoo on one, a temples and folk dances of the south on one and even beneath the golu stand were school scenes, Jesus' birth , etc . This maami has won golu competitions conducted in Mylapore Times earlier. Absolutely inspired and inspiring- she had even made a lot of the dolls herself.
I am determined to begin my "conventional" Golu collection this weekend- Khadi, Mylapore streets and also VTI seem to be the main destinations. I plan to visit the Heritage showroom on Mount road for older bommais. Meanwhile I have 2 more golus pending and one of them in Kalpakam- planning to go trow! 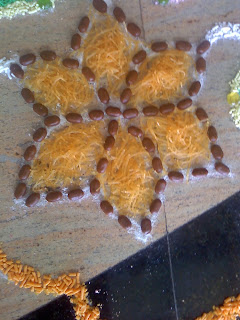 Guess what this rangoli at my office is made of? Itchy is not permitted to guess.

I am back to the same wall clock..Where did you get it?My older boy (4.5 years, would totally love it :)

Pleasant coincidence that Mrilu ( as we called her) was your classmate.! Indeed a small world!She used to live in my colony in chembur (of course her mom and my parents still live there)

am guessing that the kolam is macaroni and some bean (rajma maybe?)

looks like the rangoli is made with grated cheese/carrots and lined with cadbury's nutties!! LOL!

Cool collage of the golu. Where do you get Old bommais? That reminds me - when am in madras next, I should carry some old 1950s dolls that are lying in the trunk rather than some podis n oorugais

whoa. awesome golus! why haven't you put one art?!

the clock is superb. where do you find these things?!

Those thin potato chips? Cheese would melt, no? :) So we can expect a golu next year from you, huh?

I'd go with Boo.. Haldiram Alu bhujia to be precise.

btw Kala Ghoda festival is back - 9-12 October. Here's the link

Looks like Eclairs and grated carrots or squash to me..
-Swapna

I think the rangoli is made out of grated cheese or squash and raisinettes.