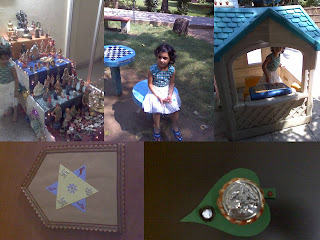 Gandhi Jayanthi came and went by. Why can't someone make a new Gandhi film? With all due respect to Ben Kingsley and Attenborough, it was aired for the umpteenth time on TV.
Anyway I explained to Anush about Gandhi and she summarised "Oh so Gandhi thaatha helped to make Chak de India ?" I think I need to give her more history lessons.
At Vanilla Place ( Anush thinks it is"plays") she helped make this kumkum box- I like the metaphor( vethalai paaku- betel leaf and nut ) used by them.
We visited Nageswara park, Mylapore for the first time and loved it. I cannot believe it is in the middle of the city and so well maintained. I understand concerts also happen here. Next on my list of things to do.
As I had time to kill while her class was on, I got a foot massage done and also went to Rangachari and blew up money on ready made kurtas under the brand Fashion Hut. Cool cat huh!?
We went for a golu ( first of the season) and Anush was dazzled. More excited she was by the cat we met up in the building which she carried ( quite carefully) and blew kisses to and ran all the way down the car park!! I requested her to put the not so excited kitty down. Then told her she could pat it and so on....it was delight to watch them.
Frutoso is a juice- sandwich shop - a less expensive version of Greams road Fruit shop in Velachery opposite Rex fashions, below Srushti. Excellent juices and a cute little mascot- a Lemur. I did not know much about them ( except that I had seen them in some animation film) but did learn along with Anush who insisted it was a cat- I tried to explain it looked more like a rat but well.
Posted by Artnavy at 9:55 AM

Lovely looking vetalla-paaku. I heard there are Chungudi salwars in the market these days? Did you manage to check 'em out?

Mylapore ...... missing chennai !and the navrathri !

so do you have golu at home?

chungudi salwars?- no i did not see any - or maybe i did not recognise? only kalamkari and block prints and some mangalgiri types

I have visited Frutoso twice or thrice and yes they do serve good juices at not so expensive rates. By the way, Connexions bookshop will be coming very soon in Velachery, near Indian Overseas Bank.

now why is no one looking at Pallikarnai- medavakam with its wonderful residents!!

After Velachery, it will be the turn of Pallikaranai to turn hep, don't worry :-) Like Vibrant Velachery, you can coin the moniker Pulsating Pallikaranai and Mesmerizing Medavakkam.

hi,
anush's wall clock is great! It's not a working one is it? :)
I gathered you are a Podar'ite..I didn't go there (was in Swami..if you know where that is)..were you in any chance a classmate of Mrinalini?
Am a frequent visitor but a seldom 'commenter'...
-prita

am blogrolling you at chennaifoodreviews.blogspot.com :)

what fun! yup your place does sound like an art gallery (pardon the poor pun)!

btw that pic is nice - chequered t-shirt and chessboard.

you do not have golu?! i am amazed. btw why do we need gandhi movie again? we should march forward and in new world non violence will not buy us anything against radical pakistan

hey art check out our kolu!

prita- the clock is indeed a working one- yes mollu ( chembur?) was my clasmate

chox- thanks and will take up your invite