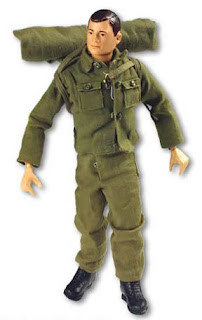 I do not like the assumption that girls play only with dolls and would not be interested in vehicles or other such " traditional male domains". Especially from educated otherwise progressive people.

If books are unisex then why not toys/ dolls? One would think the toy manufacturers had placed blue and pink dots along side the reccomended age to indicate which gender should opt for it .

I never assume that a boy cannot/ will not play with a doll or a kitchen set. I just Pooh Pooh these notions.

And a doll can mean anything from Noddy to Raggedy Andy to Teletubbies to Hanuman right?
For further clarity look at how a doll is defined-
A doll is an object that represents a baby or other human being, but also includes likenesses of animals and imaginary creatures. Dolls have been around since the dawn of human civilization, and have been fashioned from a vast array of materials, ranging from stone, clay, wood, bone, cloth and paper, to porcelain, china, rubber and plastic.

So the next time you tell me that girls are into dolls and the assumption is that your boy is not- think twice- by the above definition even a plastic GI Joe is also a doll.
And in case anyone is curious, Anush does not have a Barbie. Nor does she have a GI Joe.
On to elaborate on choxbox's query on the "Marapaachi Bommai "- they are made of a certain wood - marapaachi ( Red sanders?) near Sri Kalahasti in Madhavamala ( near Tirupathi) and are a must in golus. They are usually gifted at the wedding by the bride's parents. Possibly seen to promote fertility ( like a totem). More about them here
Posted by Artnavy at 9:28 AM

Since you have a masters in business management, let me ask you this question. Can you put a business plan with a revenue driver based on selling dolls to boys? Do you think it is sustainable? Or better yet, would you be willing to invest in such a company?

Next is a genuine (less rhetorical) question:

what would your marketing strategy be for such a company?

btw, why are the most popular dolls (Barbie and GIjoe) American figures? Isn't there anyone in India to idolize ?

nice post! good to see such non-judgemental parents... I think all kids should be encouraged to play with any toys that they enjoy, provided they are not harmful in any way and fit the parent's budget :)

kid-
noddy/ pooh dolls are all popular with boys as well - so u shld check on their business plan :- ))

i do not think gi joe is too popular here. of the Indian icons Gatothkaj, Hanuman and Ganesha are hugely popular and all have enough of a franchise around them

strange- after all most boys grow up to look only at the bips and deepikas of the world and girls end up usually looking at the imrans and the ranbirs- well...

apu- i knew this would strike a chord with you

hey thanks for the gyaan, will pass it on to n3 (she is terribly interested in golus - spent almost an hour in each house checking out minute details and giving a running commentary on which particular mythogical event was being depicted etc, thanks to amar chitra kathas :) )

totally with you on gender stereotyping of toys and you know my opinion of barbies and such like.

anytime choxbox-ACK rocks- anush knows the pandavas' names, nost of teh dashavataars and the story of prahlad ....

its all just perceptions and age old prejudices! and though i loved barbie as a kid, i find them so silly these days!

id rather buy Cubby interesting wooden toys that are made around here! :D

art my only gripe with all this mythology is that i have to answer Qs like - mamma, why do all kings do sacrifices only to get a son? etc :(

A slept with his Noddy doll till a month ago. Didn't bother me in the least

nice post I have to agree with you.my son carried around an elmo doll everywhere.

My little girl loves dolls of all kinds - Hanuman, Barbie...give her any of those and she's a happy camper. She also loves cars and trains. So to heck with gender stereotyping and the boys will be boys attitude.

agnes- that is really sad