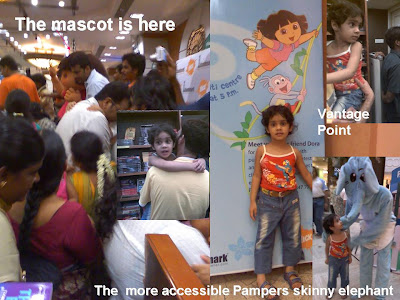 I had my first brush with how children can hero worship a cartoon. The event was sponsored by Nickelodeon who I am sure never anticipated this kind of crowd. We met Dora the Explorer- so what if she was a man who wanted burger and a bottle of mineral water when (s)he visited the men's loo..... Anush made it just in time to touch Dora's 'hair' and shake hands- we were strategically placed near the loo for want of space. That worked in our favour! I can't begin to imagine the amount of germs that could get transmitted from mascot clothing.....

I met celebs of a different kind- tharini, kowsalya, itchy, crazymom, and minka ! All for a few minutes of disjointed conversation since we had to rush off to see Dora! But I would not have missed this opp ever. No pics with me but I am sure you will see some on their blogs

We moved into our new home- finally! A few people passing by our open flat asked if it was a model flat!! I took that as compliments. Our builder also mentioned that we had done it up really well ( that I take with a pinch of salt - he may have been trying to smooth ruffled feathers:-))

Anush went back to school- Montessori -1. She missed her former adult-in-charge and ayah. She was a brave little trooper both when we dropped her and when i picked her up and seems ready to go trow to her beloved school.

But she had wept in class. I could tell from her red nose. My poor baby.

here is our experience with Dora..

i suddemly realised - Anoush is taller than other kids her age! Congratulations!

Cubby is still to reach a stage where herow-wroshiping tooms will happen!! hehe!

and congeats on moving into new ghar!! pics please of the pretty home! or did i miss them in some previous post??

Tell me about the Dora fascination. We have a theme park nearby that is heavily Nick Jr sponsored. From the day she got to touch, hug and take a solo pix with Dora, she has one and only one rut. I want talking, singing and hugging Dora for my birthday.
Congrats on your new home. Hope Anushka is doing better in school now.

My ! you actually got that near. I was left winding through the maze of book shelves trying to find a way while bubbles tried to clamber onto the shelves.

Congrats on the new flat. Swung by Itchy's blog. Second Mom from the left?

alan - yes- that did not require much to figure out (with anush on my lap??) how have u been

Yeah Art, she did give you away. Despite the spots, it's still nice to get a rough idea of the person behind the blog.

I've been fine. I'm getting very slow with updates, even on my main blog (if you like crabs, check out the latest). Life seems way too busy sometimes.

I'm so far behind on Hindi movies I may never catch up. I have a large stack waiting to be watched. Om Shanti Om is sitting on top. I'm sure it's going to be good.

I'll always love Bollywood though. I'm hoping another live show will past through Vancouver Canada in the near future.