In our building we have a young girl who is hearing impaired.

She plays with the rest of kids. They speak in signs and smiles. Like Singing hands.
Everyone tries to include her without thinking too much about it.

It is often said that Kids can be brutal/ cruel even.

But kids are also really large hearted aren't they? 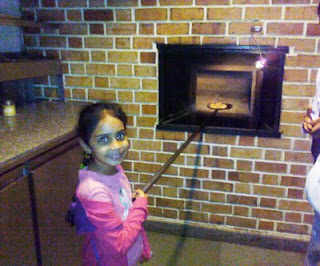 It was the birthday of Anush's cousin, the inspiration for a book by an extended family member.
More on the book later.


We celebrated at the Indira Nagar Little Italy- AWESOME. Anush also made her own pizza from rolling it out to baking it ....
Posted by Artnavy at 8:11 AM

hi Art! Anush and Aditi look so cute - and Aditi's hair have grown into such a lovely mop!

I think kids are just matter of fact... to our 'trained' ears some things sound mean.

Does little italy allow ppl to do this or did you persuade them? sounds like a really nice thing to do.

you are right Uma
did the tag

Little Italy people asked Anush if she was interested and she said yes and they let her roll, dress,bake and eat the pizza!

Thats lovely..kids are better than adults in so many ways :)