Rediscovered our much loved rocking chair this weekend. Since we got to Blore it has been gathering dust in the balcony and used probably once a month or so! But yesterday I got it into the bedroom and the girls loved it as did the boy of the house!! He said it made him want to sit and watch TV. Some clever reorganising by my dad and we had enough room for it inside. And now though it has regained its pride, it is complaining of overuse!

Missed an ST meet which I had been looking forward to.

Enrolled Aditi in a play school beginning June. And Anush was the one who gave us the go ahead. She liked the place enough to suggest that she would also go there instead of her current school! 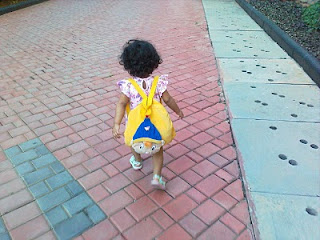 In the two schools we had considered for Anush in Chennai ( years ago), there was a prep class- about 2 hrs a day ( Anush went to one) which works well since it naturally progresses into Montessori and there is familiarity with the school as well for the child.

Here in Blore that does not seem to be the case - at least as I know- no reception class for the almost 2 to 3 yr age group in the few Montessori schools in our area.

We ensured no clash in 'syllabus' in the play school we selected for Aditi since we do not want her getting hassled about ABC and aa-ba-ca. And of course are satisfied with the hygiene and security bit. Were a bit appalled by the fees but such is the scene now we guess. And Anush thinks Aditi is going to LOVE this school. Fingers crossed!

All the best to aditi on the pre-school....

Hi, Delurking for the first time here I think. Just wanted to say - I LOVED the picture actually :-) says - Im all set to Go!

All the best to Aditi and Anush...

Missed meeting you at the ST meet. And yesterday!:(
Hope Aditi is much better.

The photograph is lovely! All the best to the young lady as she starts school.

which school are you enrolling Aditi into? If you dont mind telling me... this is Preeti- preeti.pr@gmail.com..

Please do mail me...