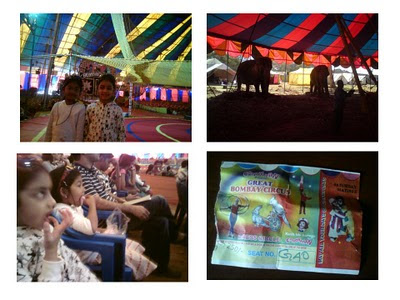 We went to the Great Bombay circus with Anush and her buddy and were completely mesmerised. They had a mix of Russian, Indian, Chinese and African acrobats/ performers.
A tad too lengthy on the whole, but each individual act was crisp and awesome.

Not too many animals so that made us feel comfy what with animal rights being such a concern nowadays. Anush's friend was bored mid way but Anush wanted to go again the next day!!


Instead, the next day, we visited Egg factory for an English breakfast and alos saw a Tamil movie- Man Madan Ambu which was fairly entertaining and given that I adore Madhavan and Kamal uses him well in comic roles- it was great!

We also visited a friend off Mysore road and it reminded me so much of Hiranandani Powai crossed with Kotturpuram!
Posted by Artnavy at 9:08 AM

ahhh circus. :) the last visit scared me enuff not to try for another 2 years! glad anush enjoyed it.

Hey! Happy New Year! Got back from my vacation recently so was reading through all of your posts that I missed :)
Where exactly is The Egg Factory located? I have tried looking for it in the past on St Marks Road but couldn't find it. Do they have a website?