Back to school in Bangalore 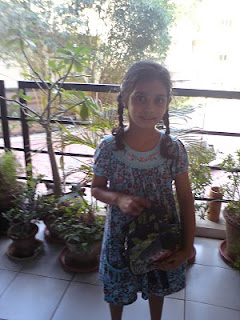 Anush went to school today- her first in Bangalore and her second school so far . She started the day with tears and moved on to sobs and requests and then calmed down after a few stories.

She asked why she had to change schools and we reminded her that this was in the larger interest of staying together as a family. Also so far she keeps saying " Everything is better in Bangalore..." We used the same line shamelessly......that seemed to clinch it.

I had also gotten her a Mowgli bag and told her that she would make many friends like he did ....

Once at school, we ensured that she had a look at the loo and got introduced to a couple of affable teachers before I left. Anush was happy that one of them said that she could address her as Chithi which is how the adults were addressed in her Chennai school.

There is a lot more outdoor setting in this school though it is smaller than the one she went to in Chennai.

The daughter of our good friend N, from our PG days, studies there. She happens to be in the same class as Anushka. They have taken to each other and Anush is chilled out as per N who reached school later.

I hope my darling likes this school better than she did the one in Chennai.

- God Bless
- She'll settle down don't worry :)
- this hardcore chennaite can't digest the "everything is better in Blore" bit though...:b
- Blore schools open early do they?...

Hey all the best..dont worry she will definitely settle down in a couple of days... :)

Aww! All the best to Anush! In a few days she will be all settled and hopefully will start loving the school :)

Hi,
was just browsing through when I came across your site. If its fine with you, can you please let me know which school have you selected for Anush? I have a son and am currently school hunting!!! :-)

sherkhan- while i will not be comfy telling u our specific choice, we have heard Headstart, Shihsu griha, akshara, arunodaya, golden bead, neev are all good and follow the montessori system- if that is what you are looking for

i bet you'll soon be blogging about how she likes the school - and i agree with her heartily about this city - the weather itself is enough, so says a bangalore-lover ;)

and AFAIK, neev is not a montessori.

Good luck to Anush! School transitions are hard for kids. Am sure she will do great :)

Hey, good-luck to Anush. I hope she settles down quickly.
And agree on the weather-this is Air-conditioned city, although it has been quirky of late.

school started already? I'm sure Anush will settle down soon.
Just realised that this one is Pattu's 3rd school :)

All the best to Anush! I'm sure she will love this school once she's used to it.

Don't worry. :) She'll love it once she makes new friends.