We moved from
the T Nagar house - an old but practical though too hot third floor flat with one more quirk- it had a single toilet with a western and Indian option placed right next to each other!!

then to one in Velachery - a gorgeous laaaarge first floor of a bungalow in a lousy neighbourhood, on a street where the car cannot even take a U turn

Despite all the quirks each house came with, we had great times in all the houses- frequenting all the nearby eateries, movie theatres, handicraft exhibitions and so on. Our landlords were all interesting characters - mostly academicians- and were always delighted with the way we kept their home and the way we left it later as well.

Why did we move?- the moves were based on proximity to my ever changing jobs (one a year) And I mean it when I say I enjoyed it. The house hunt, the packing, the newness, the setting up home and the moving on routine.

Then I settled down in my current job and we bought our first home- Varnam- an acronym using the first alphabet of all our names ( ILs, my parents, Art and Navy) It was in Velachery- an upcoming locality in those days. Not a patch on Anna Nagar and Besant Nagar my most favourite residential localities in Chennai.

But over the years , our Velachery home brought us much joy. It was a 'site' seeing spot as our neighbor called it. And that made our time spent on doing up the house even more worth it.

Anushka was conceived and born here. ( I believe she waited till we got to our own house, since I had had a miscarriage earlier ) Navy moved jobs finally and I progressed at work. Soon we closed the house loan. The real estate boom happened and Velachery was suddenly seen as vibrant and happening - but we decided we would never sell our first true home filled with so many memories.

We needed a second larger home for the time when my ILs would join us and so we bought our second home- Aavarnam ( same naming concept with my two little angels As added) in a locality where we could afford our dream flat.

Though my ILs could not join us, lo behold we had another little miracle and Aditi happened! Here in the house which also earned us a place in a newspaper, we became parents of not one but two kids.

Cut to present-
We are letting out our labour- our bitter sweet memories- our homes- for rent to an unknown quotient. We hope they take adequate care of it in their own way.
Meanwhile, the quest for a suitable flat in Bangalore is on and I am sure we will find a good or even better house.
But is it not possible as Anush says" To lift our 2 homes from Chennai and place them in Bangalore" ?

You see the lines
Yeh tera ghar yeh mera ghar kisee ko dekhna ho ghar to pehle aake maang le teri nazar , meri nazar ... could have been written expressly for Varnam and Aavarnam, as far as we are concerned.
To be continued

For those not interested in the above here is Anush's 'card' for Aditi's 5th month bday a few days ago. 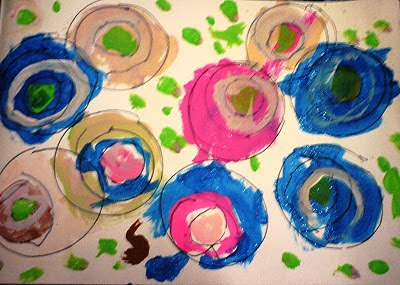 Nice post...look fwd to your moving here and getting as nice a flat...

Welcome to blore... Bangalore is no T-nagar / anna nagar.. but its got its own addictive quirkyness. :) hope u enjoy it here as much as u did at all the other places u got to stay earlier.

Loved reading this. Esp the names of your homes! Didn't know you'd had a miscarriage...sorry to hear that.

Oh and the photo is SOOOOO CUTE!

Nicely done. waiting for part 3. Loved the naming of the houses :) Got to agree with you on Besant Nagar. Spent my entire life growing up there :)

Loving these chronicles. And nice card, Anush. This might be her best work yet!

I know the story is a bit cryptic but despite that it is rather long and some of it is deatiled in other individual posts in the past....

Visit http://www.sriloans.com We offer the lowest rates of interest available for car financing loans. We require your basic details, and match them with the best lenders across the nation so you can avail a pre-approved car loan.