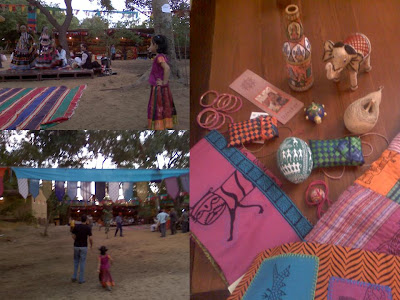 I like dancing and despite my bulk still manage to shake a leg. I enjoy watching dances too.
Among Indian folk dances, the Rajasthani dancers with their " Ra ra ra ra ra raaa" chant are awe inspiring particularly when they bend backwards to pick up a note resting on the floor.
Saw this and a lot more at the Dastkar fair in Kalakshetra. Also ended up buying too much as usual.
Chennai Sangamam had not yet started at 7.30pm at Besant Nagar beach so missed that.
****************** 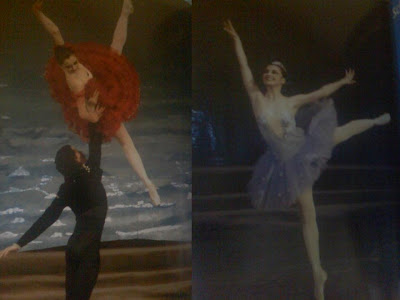 I also used to love watching ballet as a child/ teenager. They seemed so ethereal. So fluid in their movement. . . I used to giggle at some of the men's anatomy I admit.

Some Russian/ European folk dances such as the Kazak man who leapt into the air and continuously performed somersaults were very enchanting. I would fancy that I was a nimble dancer and lament that had I been born there I might have learnt some bit of ballet.

I remember in Bombay, watching with wonder the Ballet on Ice ( was it at NCPA or near it?) and the Ballet in Shanmukananda hall and a couple more that are not so clear in my mind anymore. Now no Bombay, no USSR and I have not given much thought to ballet either.
Ballet re entered my life this week- through the Navoi Bolshoi Ballet from Tashkent who staged shows over the weekend in Chennai. They had already finished in Delhi and Mumbai and are headed for Hyderabad today.

Day 1- Don Quixote vs Day 2- A medley of classics. Opted for the latter and was not disappointed. They had excerpts from Laila Majnu, Don Quixote, Swan lake ( awesome especially the quartet's synchronisation and the music) , Spartacus( gave me goose flesh), Romeo and Juliet, Raymonda ( ethereal), Nut cracker ( the stage was too small to accommodate the performers) .

The stage could have been better, since the stage was rather insufficient for the larger dances and also it had no sheen- looked like worn out cudappah- not befitting even the lighting and the costumes let alone the dances.

With my limited knowledge of Ballet I will give it 7 on 10. Most of the dancers seemed very competent but only a couple ( an Oriental looking dancer and one of the men) were outstanding.

The orchestra was fantastic though. Also came back home and learnt a bit more about the various instruments that typically form one.

Anushka behaved herself wonderfully ( possibly she identified with the land of her name's origin) and kept giving the dancers of her choice a thumbs up signal!! She got a little bored in the second half just as her father did. At home she has been trying to do her version of the ballet to hilarious effect.

The tickets cost a bomb - Rs 3k, and 2k and the cheapest one was priced Rs 500!! Yet there was a good turn out, mostly ballet class kids with their parents and grand parents I understand

And I promise I did not giggle at the men's anatomy- just took in their gorgeous bodies, especially Spartacus, rendered even more beautiful with their dancing.
Posted by Artnavy at 4:22 PM

please send the troupe to our city too.

btw i saw exactly the same ra ra ra women. you can imagine how excited the non-desis would've been! i was going to get something for itchy and you from the exhibition but ran out of time.

I went for day 1. Was real good. and yes.. the orchestra was superb..

Till when is the dastkar fair on at kalakshetra?

wow!!! that sounds cool... and i love rara rara ra too... its so pretty... not much in ballets but sounds interesting


monika-
oh both of them were fun

I was utterly fascinated by ballet as a youngster, and still love listening to the music of Swan Lake and the Nutcracker Suite. Have ou seen the film, Billie Halliday?
A coal miner's son becomes a ballet dancer, after facing many obstacles.
The finale still gives me goose bumps.

I remember watching a ballet too..long long time ago.. it was at the Russian cultural center...
cant remember much now except that I was quite impressed!

i think it is BILLY ELLIOT

vj- time to revisit with the kiddo soon then

wow!! seems like a totally gorgeous performance! i loved watching it too. that and ice skating championships they showed on TV.

Oh yes of course- Billy Elliot! Billie Halliday was a singer from yester year, I think.