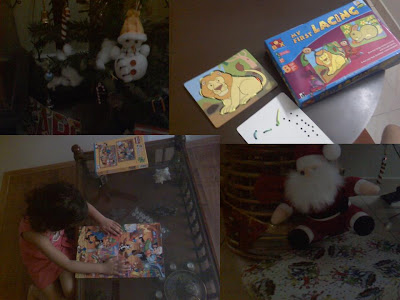 Took off on Christmas eve to be with Anush for a couple of days. Also need to exhaust lapsing CL.
We went to Ashoka , Egmore for breakfast- very good and simple South Indian fare
Went to the main Cooptex at Egmore/ Nungambakkam and was amazed at the types of cotton saris available in South India itself. Picked up a paavadai chattai on sale for Anush from Apco- a mos friendly stall owner just the opposite of the Gurjari guy there.

Went to a few eyewear shops for my mother and could not find a classy yet trendy pair of goggles for her age group. Hope to find them in Shoppers Stop now.

Did get one pair of sunglasses for Anush though, which was checked and surely not going to affect her eyes as per the sales girl and going by the price I would have to agree.

On Christmas day Anush's gifts included a Kids sewing/ lacing kit and a Pinocchio jig saw which she attacked with gusto. We re- gifted the laptop given last Christmas by my cousin in the US as well.
We took her to Jumbo because Gajini with her was out of the question. Even Jumbo was a little didactic and violent but on the whole she enjoyed it.
Navy and I saw Maharathi which was an awesome movie. In teh genre of Johnny Gaddar. 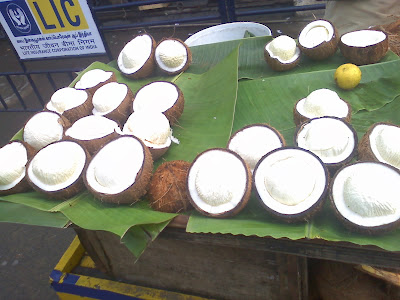 Saw "sprouted" coconuts for sale on the roadside- never seen them before an did not know they were a delicacy
Posted by Artnavy at 6:54 PM

I wrote you an email about restaurant reviews. Eagerly awaiting your opinion...

Responded- hopefully you dont hit a wall with it!!

Read your article, if I just would say: very good, it is somewhat insufficient, but I am