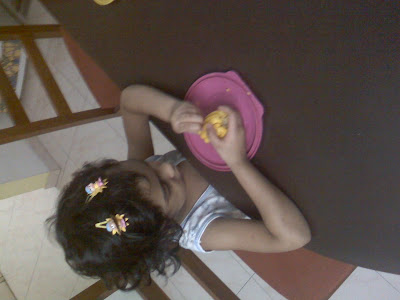 Anushka was having a small piece of corn on the cob and yours truly was having one. I offered the third bit to my mother and she refused.

Anushka to her grand ma with concern- " Paati, why are you not having?"

Without waiting for a reply from paati, to me " Amma give me that piece to me- I will eat it" with urgency which implied quickly before paati changes her mind!!

Saw The Bong Connection and Saas Bahu and Sensex over the last couple of nights. (Anush has been sleeping early. Navy has been returning late)

The former was surprisingly interesting - it brought out the conflict and contrast of not belonging anywhere but wanting desperately to belong.... you know- NRI trying to be Indian- Indian trying to fit in in Texas...

Saas Bahu.... was a let down despite the fact that I adore Kiron Kher. All the characters were rather stereotyped and caricaturised in my opinion. Farook Sheik thoroughly wasted as well.

I loved Bong Connection too. Very well made movie.

she does love her food! touchwood!!

havent seen either movies... too many getting added to the list!

monika-
glad u agree- u saw bong connection? no body had heard of it here- i found it in the dvd shop

I am in Kolkata. It was quite a popular movie here

ooh boiled corn. i love it. it is raining here and how i wish i had a nice steaming hot corn to munch on...

monika- some how thought u were in
Blore- sorry.