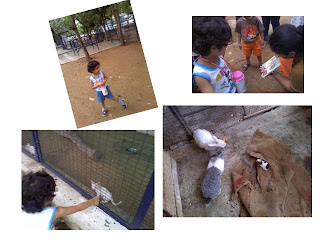 We ( Anush and I) finally took the Storytrails' Animal Trail for 3-5 yr olds
Well thought out and executed by a group of 4 ladies, the Blue Cross seemed to be a good venue for the kids ( and us) to start being aware of animal rights and the pathetic plight of some of them
The trail itself was a good mix of fact, petting rules, feeding tips, concern on the animal health and of course, interspersed with stories & summed up with a good wash and a bit of colouring little animal cartoons.
Actual handling and feeding of the animals- carrots for the rabbits, bananas for the goats, biscuits for the pups and grains for the roosters took place and Anush was game with everything except the grains for the turkeys and roosters. She wanted to visit the pigs and the ponies which she spotted up close but that was not on the trail.
While I would recco the trail to all parents with kids, I was unnerved by the incessant barking and the wailing of the dogs and the overpowering stench. Possibly because I do not like dogs much myself, I felt that after half the time at the Blue cross , the rest of the trail could have moved to a more open, happier healthier environ like a farm or some such. But to be fair, I guess no one will want to put up with little kids and their extra curious set of wards.
Anush noted and repeated much later to me that dogs cannot eat cookies- their tummies will ache and that only biscuits for them!
And then she said she liked kutty( small) dogs and kittens and wished to also see a kangaroo and bring it home. I told her we would need to go to Australia for that and since then it has been "Shall we go to Australia now" despite all explanations to the contrary.
Maybe we should. :- ))
To keep up another promise, I also took her on a short local bus trip where in I was surprised to see her stand comfortably holding on firmly to the long pole with one hand. I recollect asking for the very occasional car ride when I was little but now kids ask for bus and train rides!! 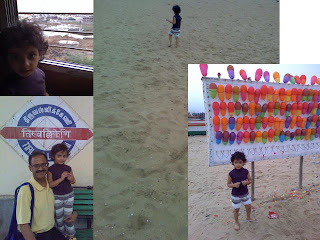 Thanks to my father, Anush went on her first local train ride and had so much fun !! We boarded at Velachery and were at Triplicane station, in a jiffy.
It also was her first time to Marina beach- we have only done Elliots a few times in Chennai and Mahabs, Pondy and Vizag with her so far
Anush UNLIKE the previous times did not enjoy the water - she was pretty intimidated. Anyway I did not force her though I was certainly tempted to.
My father said it was a phase, I sure hope so. Possibly the rough roaring noise of the waves which had been missing in her previous experiences?
She had fun doing all else that kids do at the beach- ran around, collect shells, drew circles in the sand, shot balloons (under supervision of course), ate corn and so on.
Last evening Navy inflated an Anush sized Floppy- a dog- the kind that bounces back when you try to make it topple- ( gifted around her first bday) and she loved it. So we left her room to herself for a while.
We had not been to the new place for a couple of days - nights and had gone back on Sunday. I overheard Anush telling her Nemo sticker and her rocking pony that " Please don't be sad okay? I had just gone to the Heritage house. I will take care of you okay?" Cute, huh?
What a wonderful start to Monday - India strikes gold at the Olympics- this guy earns his place in history books and this blog .
Posted by Artnavy at 10:26 AM

details pls. how did u go abt it

their website has their numbers and email is storytrails@gmail.com

Yes Abhinav Bindra has made us all proud. Really a great day for India.

krish
bindra was also very composed in his victory

Oh this seems like so much fun. I wish they had something like in Mumbai. I seem to be saying that in reply to a lot of your posts ;)

How do you find out about these places? I wondering if Mumbai is really as bad as I think or is it just that I have not been looking in the right places...

recently i casually introduced my father to them and he is now a story teller with Story trails!!

I think there is at least a heritage walk in Mumbai - saw it in India today or outlook and they had NOT featured anything against Chennai including Story trails!!

http://www.bombayheritagewalks.com/
maybe you will find this useful
and i will join u when i visit mumbai next!!