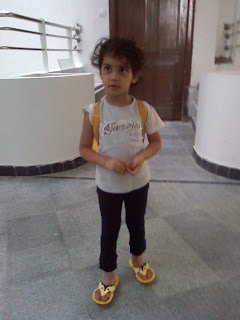 We finally had our orientation toward the Montessori system & the way it is used in practise on Saturday at Anush's school. My mother and I went for it. We were the curious ones after all.
We gathered there are 30 students in the mixed age ( 3- 6y rs ) environ that Anush is in now. More than we thought.
The adult in charge is from the US and seems as nice a R chithi who also looks up the kids once in a while.
Anush warned me against sitting on the red circle on the floor mat.
We were way back in the audience but the teacher heard her & used it later to illustrate how rules can be laid and absorbed and internalized.
That attention to detail was enough for me to reinforce confidence in the rather secretive school that Anush goes to
And they also promised to give us some " observation" sessions
The class is equipped with a lot more aids/ props/ stuff than the earlier reception class and explains her need to " I will do it- just me-- pl don't help"
It was amusing to see some parents ask questions which indicate their desire to turn their kids into geniuses or some who think they already are.
Since when has being normal gone out of fashion?
Posted by Artnavy at 10:49 AM

sounds like they really do their homework. The thing I noticed about the kids who go to Anush' school is that they are really confident and well behaved. We have a few in our complex and they seem to include Bubbles in their games more willingly possibly because they work with younger children and know how to deal with them.

LOL at that last line!

minka- hope it wokrs teh same ay with anush as welll

i think being normal went outta fashion ages ago when everyone wanted to make their kids geniuses!

but hope is still there that normal will be OK soon!

LOLing at the last lines. yayyy - another montessori convert!