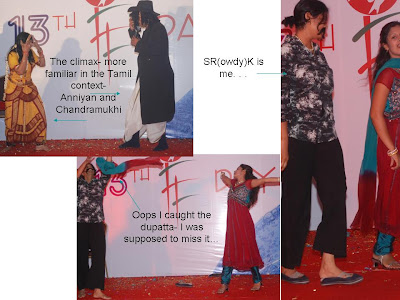 Our team - Royal Kings- stood second in the group performance, just as in sports - Silympics.
Overall, we were the number one team but there were no prizes for combined scores.

Ours was a musical "extravaganza" with most of Navy's funky clothes put to good use
A lot of props were innovative by yours truly.
The cliched theme was a swayamvaram with a twist in the tale.
The entire team participated which is what was fantastic.

I played a man( SRK in Om Shanti Om - luckily not Dard e Disco ) since one of the team suddenly could not make it. I loved wearing the huge rowdy moustache though Anush had a tough time accepting it. She is not used to a mush even on Navy.

Our group's prize money goes to a group lunch and hopefully some charity as well.
I also won a gift voucher which will be well spent on who else but Anushka.
Posted by Artnavy at 12:46 PM

Congrats. Some pictures would be amusing. Staches are cool by the way.

alan- I agree and ultra cool on a woman:-)

you know, this is the first thing i miss about working there :)

where did you get those paintings btw? they are super cool! btw when are you in my city next?