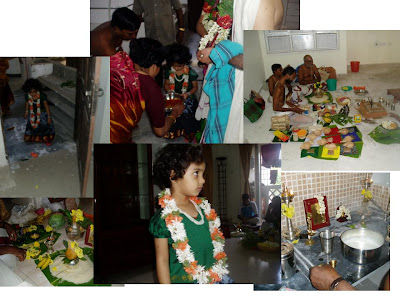 We had the house warming/ heating ( with all the smoke and holy fire) ceremony - Grihapravesh today. Sans Navy's parents ( who are in Boston) it was rather incomplete, but my paati and parents were there to wish us well.
Anush was the second "lady" holding the aarti along with my mom for want of anyone else. She took to the role rather hesitantly but did it well.
She joined us in doing namaskaram each time we did.
She insisted on wearing a garland as well and had a fun time.
Cool to note that spilling kumkum is auspicious - so I was told when that happened. How so , I wonder....
Now the quest for a new name for this home begins-
The first flat was called Varnam. We could call this Varanam to include Anushka's initial
Dakshin/ Dakshini/ Dakshina ( to cue the South Indian amalgam that both our families are)- only problem with the latter is that they sound like eateries
Srishti or South end ( mine and Navy's ideas respectively)
Posted by Artnavy at 3:40 PM

Congratulations on moving to a new home. Happy Blogging. Anush is resplendent.

Congrats ArtNavy. Hmmm if you did ask for my pick :), I say Srishti or Dakshina in that order.

Our india home is Kritika and mine here is Aashraya :).

By Deepa and Supriya said...

hey girl!..long time...congrats on the new home.
we just moved into ours and I share your excitement :)
I like Varanam

Congratulations on the new house!!! Its such a big thing aint it??
Does Varanam mean blessings??

Congrats on the new house!

Something to Say said...

congrats on your new home art!!
I luv the name shristi....

the sanskrit link is wonderful

we plan to shift within Chennai, in early June, a little away from the current house which my folks will occupy and Anush will continue in the same school