The Maths in Cricket 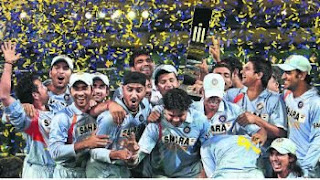 Much against the famed Tam Brahm inclination, I find numbers intimidating and when it comes to cricket I am certainly even more lost.

Granted, we did extremely well in Australia and some of our players must feel vindicated after all the doubts and aspersions cast on them. Winning the tri series, Sachin's great performance, Dhoni's captaincy, the rise of the young ones like Praveen and Ishant etc etc- all definitely add to national pride.

And then I heard that Sharad Pawar gifted 10 crores to the Indian team for this win.

Does even a fraction of this happen to the other games' players?
In a land when outstanding bravery awards get you a measly lakh or so, a death due to natural calamity gets a family lakh or so in compensation, does a victory in cricket justify almost a crore to a player?

I am sure a lot of you will disagree- but as I said it beats me- the maths in cricket.

One more thing- as Indians settled in Australia, would you cheer India or Australia? And you could extrapolate this question to any other country.... I am sure it is a tricky decision.
Posted by Artnavy at 9:22 AM

Labels: tell me why

Pouring in money this way is definitely not agreeable.
Definitely, since we are Indians, we would appreciate their efforts. But, at the same time, it is a game and we need to cheer up even if we don't win, and encourage others and try to learn the best from them.
Hi, visiting your blog after a long time. How are you?

I agree with you.Why aren't other sports/games treated at par with cricket?Our loyaly to our British encroachers I suppose.

I am totally and completely irked by this blatant pouring of money into this game...agreed that players need to be encouraged and congratulated on their win....but somehow I do not accept giving away one crore to one person just because he is in the winning cricket team.And do not even get me started on the IPL funda.

equanimity is something we Indians lack when it comes to cricket

choxbox- cool, i have trouble choosing even between Chennai and Mumbai!!

Who do the NRI's support?

My x-collegue once said that his 4 year old daughter was cheering for the USA team in the olympics and he said it felt 'different' to hear his daughter saying 'Go America Go' :)

Congrats on your lic BTW!

yoohoo...
cheers on indian victory!
two cheers on defeating THE AUSSIES!!
three cheers on sachin's role in it!!!

on the monetary side...
is the reward from bcci or indian government? the reward depends on the organization that awards it. bcci is filthily rich. they are in a position to reward the players lavishly. other organizations (including the government) may not be that rich...
how about this logic :)

lot of kiwis are happy about the series result. they are more happy on aussie's defeat than indian victory :D

inder- common enemy i think it is called

I think most folks would cheer for their original birth country first, followed by the adopted country.