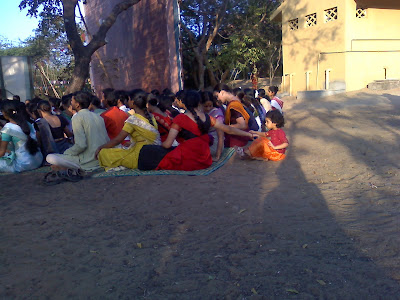 Kalakshetra had become a Dilli Haat of sorts all of last week. It was hosting a Craft Mela/ bazaar. I understand Dakshin Chitra had been the venue for smaller scale exhibition of this nature.
Craft maps detailing what is native to a state had been put up with some illustrative handicrafts - pretty informative, provided you have the time and are not distracted by purchases and a certain curious little monster who is running off by herself, handling fragile curios, much to others' delight and her mother's dismay.
I was keen to buy the ultra intricate work of Durga Bai - Gond paintings on paper and cloth- but I found it rather expensive. But art is difficult to value is it not? I was too embarrassed to bargain. Had I gone alone, I am sure i would have picked it up but my mom threw in a word of much needed caution . Also interesting was that this artist had illustrated a Tara publication Children's book by Anushka Ravishankar. I can at least buy that !
I bought a little black kettle from Manipur made of some (langpi if I recollect right) stone and a colourful wooden building like thing with multiple doors adorned with stories of Krishna and Ram from Chittor
And towards evening a large group of youth( Kalakshetra students - ex and present) in traditional attire gathered under the shade of a tree and began singing devotional Carnatic songs. They were seated cross legged and near them was the hugest kalamkari sheet/ curtain on the wall that i have ever seen. Anush very enthusiastically ran up to them, all by herself and sat behind. A couple of girls in the last row kind of adopted her and placed her between them - this pic was taken before that. She accompanied with thaalam( manual rhythm- beat) for an entire 2 songs.
I could not help but wonder if I should include Kalakshetra on the prospective school list a few years from now, when we are ready to put Anush in a regular school.
Posted by Artnavy at 4:39 PM

Super. Do let me know if such melas are on in Madras during the 3rd week of March

Have you visited Dakshin Chitra ?
It is quite an experience in itself....closed on Tuesday - u can go there any other day of the week
i will look out for such melas but I think it is likley to be an annual affair

hey i went to the exhibition 3 times. wanted to go last day but had run out of things to buy.
your mom is right abt caution at the xhibitions... u nver know the quality of the work and authnticity of the stuff. Better to buy the not so expensiv stuff as the risk is lower. picked up lot of crockery (at the gate) and bags & some dress material
btw Nama studied in kalakshetra school- u can check with her

Dakshin Chitra - yes. btw,
http://www.youtube.com/watch?v=8YpxQRVOpdU was filmed in Dakshin Chitra. Check it out!

blogeswari- watching it right now- yes i have seen this one before and there is a sari ad as well shot there (not half as good as the link you sent)- were u with Bharat bala?

have read abt durga bai too - when i was looking up books published by tara publications. got a book by anushka ravishankar too, v good stuff.

a batchmate at college studied bharatanatyam at kalakshetra for >13 yrs, so if you need gyaan from an alumnus lemme know. can put you in touch.

INDIAN TRIBAL ARTISTS REACH NEW HORIZONS
Tara's handmade book, The Night Life of Trees, has just been awarded the 2008 BolognaRagazzi award for New Horizons. The Ragazzi awards are among the most prestigious international awards conferred each year in the world of children's book publishing.