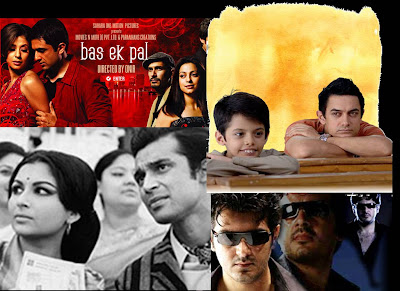 Taare Zameen Par
So much has been said about this movie. I LOVED IT. Have seen it twice so far. Here is the review which reflects my opinions exactly.

There should also be an adult version of it to remind us that raw ambition and standard definitions of success need not be the sole pursuit in life. Somewhat on those lines was Satyajit Ray's Seembadda aired on HBO or Zee Studio. Very thought provoking and surprisingly contemporary thought it was made before I was born. It talks of a go getter sales guy aspiring to be a board member.

Bas ek pal
An unheard of movie I found at the DVD library which I would rate more gripping that a lot of movies I have seen. That I am fond of Sanjay Suri and Juhi Chawla only helped. It has a rather morbid end but is reflective ( though somewhat over dramatised) of our times.Urmila looks stunning but she was better in Ek Hasina Thi.

Billa- version 2007
This is nothing but Don version 3. I really liked Ajith as Billa and the whole look and feel of the film was very international. Nayantara and Namita are really good lookign women but can lose a little weight. And what was that foot wear all about that Nayantara had worn !?!
Posted by Artnavy at 1:00 PM

Seemabaddha was very thought provoking for me too .. most of Ray's films that I've seen have that timeless quality .. they're not dated.

i've heard that Taare zameen par is a wonderful movie.God knows when I'll get to see it.