Hope all of you had a great Dassera/ Durga Pooja. We sure did.

Went to a few Gollus in the building, Anush all dressed up in her pavadais.
Celebrated Saraswati Puja ( my "second favourite" festival after Karthikai)
Yesterday, was Vijayadasami and Anush had her Aksharabhyasam - the traditional initiation into education.
Centuries back it was only by rote and listening and therefore the function was all about recitation and repetition. There would be long pujas and the child would be sent to a Gurukul. Over the years the alphabet gained importance as language evolved. So writing on paddy/ rice gained entry. 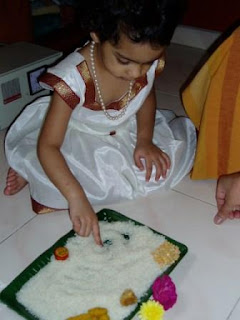 Year 2007 - Anushka wore a pretty Mallu frock from Kerala and recited 2 slokas- of course her versions- Gajananam and Saraswati and added another on her own- Achyutam kesavan
After writing the Om and first letter of the alphabet she was very keen to draw circles in the raw rice which we let her do. Navy commented it could be interpreted as a zero. Well that is to auspicious beginnings!!
The Montessori system would not have appreciated this move by us- LOL! (If i recollect right, they encourage writing only post 4-5 yrs)
Posted by Artnavy at 10:47 AM

Congratulations on the initiation! Wishing Anush many wonderful years of learning!
Golu pictures?

thanks!!yes - forgot to get the camera - will upload this evening

check this out for last navrathri

congrats! and best wishes for lifelong learning and fun...

I too wanted to do it yesterday. Just decided early morning to do it..but plans did not materialise as everyone was sick.. will do it after diwali on dawat puja day as we kayasthas do it!!

Some nice pics of Durga Puja

Congrats on the Anush's aksharabhyasam. We did Ina's too on the same day. Here's to wonderful years of learning:)

God bless Anush. Wishing her lots of joy in learning.

As for the writing bit - Montessori will love you for getting her to write in rice. More by e-mail.

And lots of love and best wishes to Anush.