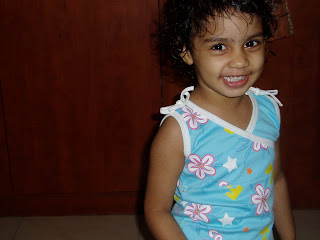 Tanishq has opened a branch in Velachery! And to huge crowds yesterday.

Heavy duty scouting around for stuff for the new house has begun. More about that later. . .

Saw another play "Sangathi Arinyo" ( Have you heard) by Basheer put together by Under the Magosteen tree. The props and the sets were wonderfully used. The acting was a little loud in parts but the guy who played Basheer was uncannily similar. This time it was disrupted by Anush's impatience though- so Anush is not an angel after all : - ))

Had a night out alone with Navy and friends since Anush slept off early and my mother stayed back with her. It was a good change.


Maruti Driving School has got a new fan in me - i had the first theory class on Momday- hi tech ppts with video demos and so on- really professional! Hope they keep their word and help turn me into a safe, confident driver as well.

Went to Palghat and Coimbatore on work and met some really enterprising rags to riches kind of people. Also shopped like crazy for Anush at Ctore and found fantastic bargains. Particularly recommend a place called Skin in the basement of Hotel Annapoorna( People's Park branch) Later realised there is a cheaper option called Gandhi puram- for next time..

Ate the most fantabulous rava dosa on earth at Gowri sankar. Discovered a lovely little shop "Rawa" which has all kinds of papads and to be frittered stuff- lotus stem/ chilly/ banana stem and so on.

Have you tried out Banana chips from Banaanaa slice@Ramnagar/CBT---Amazing chips...Absolutely mouth watering:-)

Does this Maruti Driving School have refresher courses???My hubby had learnt driving 6 years back and even has a license..But I have asked him to take some refresher course before driving me in my current status*wink*

One more favour-Any good library in Velachery? I am getting absolutely bored doing nothing at home.

Banaaaana slice is available in chennai now at the velachery nilgiris

maruti- LOL! yes your hubby can have a refresher

See...I am calling you and Itchy when I am in India during the later part of the year. Looks like you guys know a lot of places to check out and shop. I'll mail you for more info. BTW, did u know the author of the blog "Nonstopnonsense" was my class mate back in school? Small world hey?

Art - I really need to know how your trip to Vandalur Zoo with Anush was .

And oh , if anyone is looking for banana chips , check out the Kerala Hot Chips shop near Spencer's Daily on 100 ft road. the guy fries it in fresh coconut oil and it's yummier than the ones from Palakkad. And the chakravaratis too !

library- what she meant was she has a huge collection of books at home itself and not rely on a public library. india does not have public libraries as good as other nations. you will be amazed how the libraries look like in US even in small towns. not sure why government is not spending more money on that.

Hey...I'm from Coimbatore and haven't experimented a lot i must say! Any pointers to 'Rawa'?...would be of great help.
Also there's a shop in race course...Not sure of the exact location; but you get real cheap T-shirts there.

tnx vikram- hope lavs is not let down by my collection