The Karadi Show was energetic and fun but I would have preferred Usha Uthup since she is the one who originally rendered it. Anuradha was very endearing though. 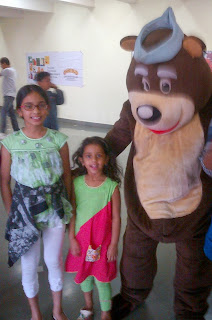 The stories were well done, the sets awesome
The language could have been less Tamil accented though.

Adi went straight to pose with the mascot and really wanted a chance to sing on stage but well we were on the cheapest last row tickets or as they say A row at the movies.

Catch it in your city if you can.
Posted by Artnavy at 9:00 AM

We loved it too!!!!And we posed with Karadi too!And yes, what was with the tamil accent??!!Apparently they are planning to come out with 2 more Karadi rhymes,one sung by Anooradha and the other by Usha Uthup. Did you hear about that?The guys selling Karadi rhymes books and CDs told us that. I hope its true!

We loved it too!And we posed with Karadi the bear too!What was it with the tamil accent??That was a jarring I thought!Apparently they are coming out with 2 more sets of Karadi rhymes. That's what the guys at the Karadi counter told us I hope its true!