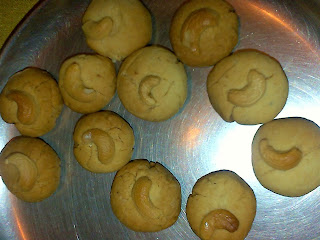 Aditi is into cooking and baking in a big way

She liked her own work enough to proclaim she would make a batch for all her classmates on Sunday.

Anushka has been learning Karate and enjoys it. Now Adi also wants to do the same. Let us see how many classes she attends ....

Skating which began on her insistence was dropped by her in under a month! Though now she says she wants to resume skating classes ( again since Anush has loads of fun skating with her friends around the building)

Sisters do seem to rule!
Posted by Artnavy at 4:32 PM