S took Anush for a lovely concert for kids at Windmills Craftworks. 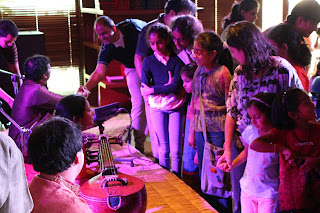 Anushka wrote me a mail about it, as I was away:


" The show was in the 5th floor . I do not remember where it was .
It was quite some time till the show started . I met my school friend , A  there .
The narrator Aarti  told us that we were going to listen to stories & hear music . There were 4 musicians & she told all their childhood stories .
Jayanti is the girl's name . Every one in her family is  a musician (violin) . And in her house was a strange instrument , the Veena . Her aunt came from Singapore & played the veena . Jayanti too wanted to play the veena. She woke at 4 , veena 3 hrs after school 3 more hrs veena & finally went to bed .
Another story . Kumresh , a very good violin player . Secretly good cricket player also . Father did not approve . A school musical & cricket  . He could participate in only one of the two  . He chose cricket . Father furious. Got him removed  from team . He chose violin over cricket .
Satish plays mridangam & his brother plays too . He feels sad . But one concert his brother lets him play Awesome concert .World famous mridangam player.
Pramat loves music . For b'day he got a  small instrument . He learnt to play it . Best thing is he could carry it in his pocket . Band came to find a new member . He was chosen for the band . Very happy .

So concise. Reminds me of how you write, points which lets you know what needs to be said. WTG, Anush.