We had the formal Griha Pravesh for our new flat in Bangalore.
It was a family do, well attended and nicely done by the priests. 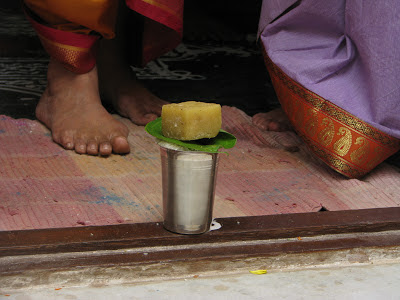 Ansuhka could not help but notice the minimal role of women in the saying of the verses or wearing the thread and so on... The head priest could not really resolve her doubts...but they were interesting conversations all the same.

We had a good number of visitors for Golu and visited some others' as well. Also went to the Bengali Mandal Durga Puja. The header pic is from there. Plan to do a dandiya next year when Adi is a bit grown up.

The girls have been wearing traditional attire for the last couple of weeks. Time for the jeans to come out from trow!!
Posted by Artnavy at 7:32 AM

Many congratulations ArtNavy family on your new home! Eagerly awaiting a home tour. :)

Congratulations on your new home Art! Wishing you all the very best :)

wow!! loved all these posts!!