All kinds of people 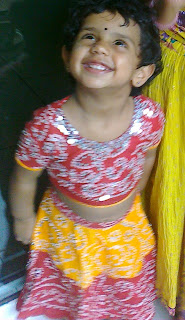 Happy Janmashtami, Krishna Jyaanthi.
Anush was game to dress up as usual and Aditi was not, as expected.
We went to Cmani and returned early and were at Blore for the rest of the festive day.
This time Anush rolled the entire batch of coconut cheedais ( right extreme, below pic)and pretty well too. Amma ( with my able help!) made yummy appams and she made awesome kai murrukus (without my help)!
Here is Anush as Krishna. Though Aditi would make a fab one she just REFUSES to wear a feather or play act.
Since white footprints were not visible last time, we used blue ": The colour of Krishna" Aditi at first understood Kolam as " Cholam" ( corn) and was disappointed not to find corn!
Anush sang Achutam Kesavam and then I revisited a beautiful film song with the kids- Kanha bole naa.... 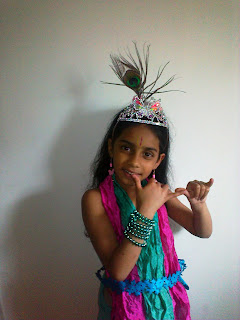 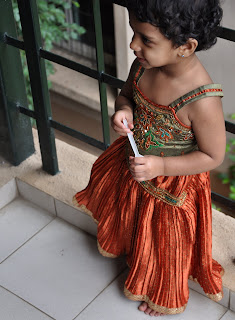 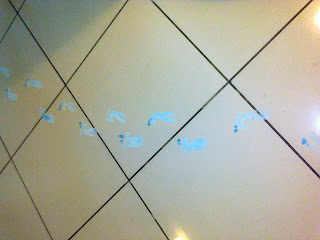 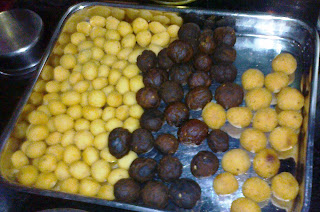 ******
Anushka's old school teacher called to wish her a belated bday as did an ex neighbour who has moved to Hbad. People can be really Nice!
******
Our evening roti bai/ cook ( for over a year now) was caught stealing jewellery at our friend's place. People can also be really shocking!
Posted by Artnavy at 10:02 AM

I think we should move somewhere closer...the kids together will have such a fab time! We dressed up kinu as krishna too, but the white foot prints were a disaster...must try your blue idea next time. Was missing the seedais ...and that's another reason why we should move closer, am sure you'll send home some for us :))

in the first snap aditi resembles pooh from teletubbies:)

how does one do foot prints in blue? i asked LB whether he would walk with his feet dipped in rice flour and he refused:(

we stopped doing bhakshanams for a long time now. Just buy the krishna jayanthi pack from next door krishna sweets and celebrate.