Simply enjoyed reading the Fun in Devlok series by Devdutt Pattanaik from Puffin.

To say that Indian mythology is rich would be an understatement. My fondest memories of my grandmother are of listening to her much embellished tales about Hindu Gods, munching on her murrukkus. It would delight me no end, on occasion, when she introduced me into the story as a character.

Having said that, as a parent now I have some reservations on some of these stories in terms of the stereotyping they propagate and the relevance in our times. For example the King wanted a son ( though he had 10 daughters). It certainly does not fit in with today’s parenting style and lifestyle.

But no one can deny the wonderful lessons and meaning many of these stories have. Devdutt Pattanaik, a favourite in our household in his early days when he wrote books on Shiva, Lakshmi and Ganesha , has recently published his work Fun in Devlok through Puffin.

This series is a lighter, contemporary take on mythology- not to be taken lightly. Hidden are nuggets of wisdom and social consciousness, backed by fluid story telling.

There are three stories- An Identity Card for Krishna, Gauri and the Talking Cow and Indra finds happiness. You do not need to read them together or in any particular order. In two of the stories, the protagonist is a child of today.

Gauri and the Talking Cow 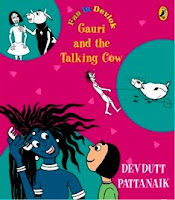 Gauri, a curious city girl on her first visit to a farm discovers how animals and the earth need looking after. She befriends a talking cow, Sweety and in the process learns a few stories including those on Surabhi, Kali and Gauri and Indradhyumana, a King who did not realise how much good he had done. And even offers tips on hair grooming to Goddess Kali! 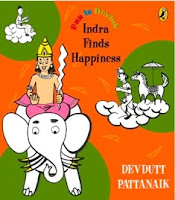 Harsha, a boy who feels he is the unhappiest person in the world, meets Indra and discovers the story of Vashishta and all the wish granting things possessed by Indra. He realises that true happiness comes from being contented. He also demonstrates impeccable behavior when he refuses to steal even at Indra's behest, rightly observing that even Gods could make bad decisions.

An Identity Card for Krishna 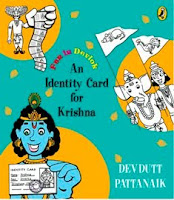 Anushka's favourite story was this one, where lovable Krishna Bhagwan dons a teenage avatar yearning for his first plane journey but stopped by an earnest security guard. Krishna's devotee, who reminded Anushka of her great grandmother, tells Krishna the story of Anasuya and the Ashwini twins, and why Rishi Chavan made a rule that all gods should carry a flag with their symbol- sort of like the ancient form of an ID!!

A wonderful introduction to mythology, in a contemporary context, you can see that there are multiple stories in each book. There is enough humour to engage children and the stories are interestingly illustrated as well.

A must buy for 5-8 yr olds! Aided by the large font size, they will find it an easy read and give you a lesson or two on not just mythology but also on values.
Posted by Artnavy at 11:52 AM

Are in a sort of crisis w.r.t. reading material in thes eparts, so thanks double.

What a coincidence- was JUST looking thru these on Flipkart. I like Devdutt Patnaik too. But sadly his Introduction to Shiva (which was my introduction to DP) was eated by termites.. :-(((((

Thanks! I will ask my mom to buy this for Narad when she comes here. Am sure my older one would love to read/look at the books.