After being offered a choice of all three schools, we or rather Anush opted for the one that is close-by and well established. Her reason was that the teachers were very nice and the test they administered was more interesting. After we paid up the fees she said that she liked school 2 better because of the campus. As my heart sank, she threw me a wicked grin!!

Aditi had her first hair cut and transformed to a naughtier avatar. She was pretty composed 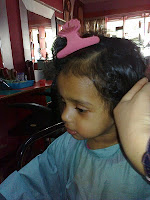 during the ( non) episode. Bless her.

Both kids are down with fever and we go through the drill yet again!

:-) one of the biggest decisions well-made. All the best to Anush!

all the best to anush.. and get well wishes for both the kids.

Ouch! Thats for the fever.. and COngratulations.. thats for 2 very intelligent babies that have blessed ur home :-) BIG kala teeka.

Congrats and best wishes to Anush :) Very amused by her prank

Many congrats - good to hear and all the best.

Have been visiting ur blog for a lon time now, but never made a comment.... u make a very great connect with d way u write....

v r shortly moving to bengaluru from delhi... so would like to know the school of anush for my son who is into class 3 this summer..
thanx in advance

hi lavanya- pl send me a mail to artnavy@gmail.com