Anush's school distributes flag badges on Republic Day eve. Anush insisted on wearing it post bath today and we revisited the Karadi Tales song on the flag. She is anyway conversant with Vande mataram and Jana Gana Mana. Introduced Mile Sur mera tumhara to her and she wanted to know what to speak in MP/ Delhi and some other states if we lived there for long.... a nice intro to various languages that this country abounds in....

I told her briefly that it was today many years ago that rules were formed as to how Indians should live. She asked if it was then that they decided that kites should not fly in Chennai!! I wonder if Dr Ambedkar would have thought of kites ever

Anush saw some raakshas on TV and got scared ...I was trying to tell her real from imaginary. So I told her - " Rakshasas, dinosaurs, dragons.. all this is not real Anush... "
" No amma Dinosaurs were real.... many years ago.... now they are not there... just like tigers also are becoming less"!!!
******
Anush wanted to know if schools in Bangalore have a toilet and how they would be...

******
Anush returned from school and was delighted to see this jigsaw complete" Amma you are super fast ma!!" That is to tell you I did another Royce 3D puzzle- Undersea Garden- this time in a more honourable 5 hours.
******
Here is Anushartica- the penguin inspired by Shruti's work. 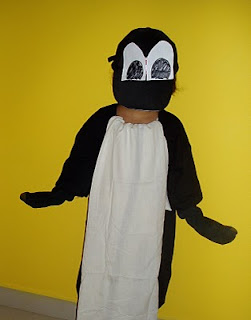 LOL ! awesome!! :) they look so cute in costumes rt?
-Shruti

The karadi tales song "I salute my flag" is really great isn't it?We had a republic day function in our building yesterday and all the kuttis performed to that song.It was adorable!

And have you heard of Phir Mile Sur?!

Choxbox said...
This comment has been removed by the author.
January 27, 2010

Aww she knows so well abt the tigers et..al .. so much to learn from her :)

shruti- tnx for the tipo

abha- one pic already up- the frogs one

awww! such a lovely photo :) she makes a great penguin...

Her insight into the dinosaurs and tigers were pretty cool :)

sands
we went into a site on endangered animals and tried to understand more.... her questions made me explain how animals could die and yet not go extinct if they left the next gen behind