To Tumkur, Heaven and back 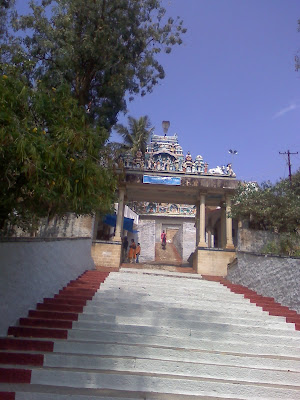 Also went to a temple called Siddhaganga- " This place is supposed to be where Lakshmana shot an arrow to get water for Sita when she was thirsty during their walk from Ayodya during the exile.

it is believed that on Vaikunta Ekadasi (yesterday) if you go to certain temples you will attain a non stop ticket to heaven! I am force fitting this chance visit under that.

An aging sadhu was lying there in the temple premises and people were thronging him for blessings. No offense but he looked more in need of help than them, at least to me.....

Back at the Bangalore airport, met my father for an exact 3 minutes after the final boarding call was announced for my flight!! That was heavenly bliss.

And then the cherry on the icing on the cake was that I finally got to meet choxbox!

Anush knows her as the giver of the mesmerising "Handa's surprise" and now "A Squash and a Squeeze" and to me she is a soul sister if there ever can be one...

you know the nail-biting finish to the trip! the guy was good - do say hi to him if you meet him again.

did anush like the story? bet she has already learnt it by heart and is narrating it!

coined her own MORAL also- so animals shld live outside and people shld live inside the house, yeah?

LOLing at her funda! priceless!

she's such a sweetheart. kaala-teekafy please.

wow!! that must have been fun!

and the Qs in temples in blr were unbelievable! they seemed uneding!

someday when you in bangalore, ping me! :)

Very J. I want to meet you and Chox!
And all the kids.