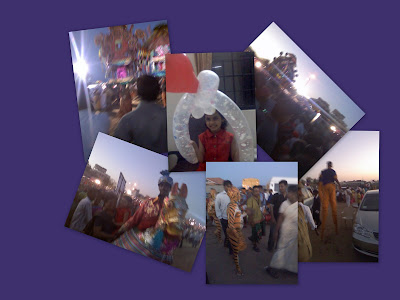 Friday evening we went to the Grand Finale of Chennai Sangamam at Elliots Beach. My mother and I were as delighted as Anush by the folk artists and the fervor. The lad on the fake horse ( poi kal kudurai) was so friendly with Anush - I felt this fest was surely giving artists and spectators much needed exposure/ interaction.

The food stalls were full of variety but most of them smelt of non veg- and masala and hence I gave it a pass. The Kambar payasam ( kheer) was really interesting though. Anush had a frappe at the Tamil Food fest!!


We chanced upon a lovely kids clothes shop called Fashion Hut if I recollect . Bought a few things for Anush.


Next day we went for Chandni Chowk to China and was it a let down! Despite the bad reviews we went for it- have only ourselves to blame. Too much slapstick. Only Mithun was nice but his kicking Akshay was definitely not.

Saw a cute movie on mistaken identity with Dustin Hoffman/ Geena Davis called Hero. Liked it (particularly the digs at media and their undying thirst for drama) but somehow it seemed a bit too simplistic. 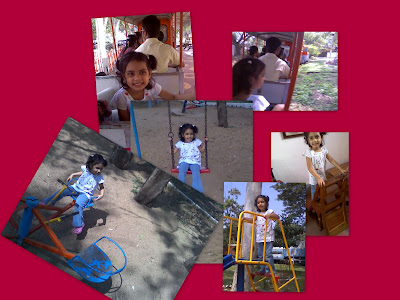 Sunday we went yet again to the regional rail museum ( ICF) and since it was Navy's first visit , Anush and I spent more time at the play area and he went into the details of trains, rails, brakes and the mechanics of it. We also met an unsung hero- a gentleman who had restored an ancient engine called the Fairy Queen.

For more on the title go here. I must admit I did not know it till recently. Our friends were to join us to the rail musuem but dropped out when we suggested a Sunday morning. I realise we keep oursleves pretty busy even on holidays - unlike most who would use the time to rest and catch up on sleep.
Posted by Artnavy at 10:58 AM

wow!! i never stop getting surprised at how much you pack in your day! :)

Sounds like such a lovely weekend. :)
Love the pictures.

lordy you live an interesting life!

such lovely pics.. CCTC... the less said the better

I wish I could do so much over the weekend and then return to work on monday without complaining !!