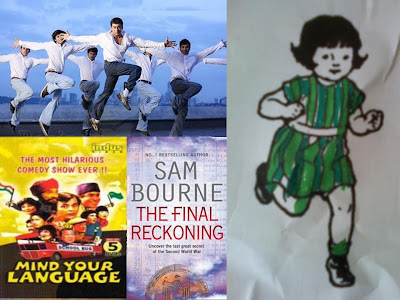 Could not go to the Landmark Children's book launch, Dostana or the Vanilla sale.
But went instead for Varanam Aayiram. Surya is physically unbelievable- not the toned muscle bit, he really looks the 17 yr old college boy he plays. He reminded us of Raghuvaran in his aging role. And you will find him more endearing in the father's role than in the son's.
Choice of heroines needs a rethink. Imagine Simran as a college going teenager- she surely looks like a teacher despite the ridiculous pig tails. She suits the role of the aging wife though. Sameera Reddy needs to get her act right and soon.
Songs have that heard before quality about them. The dialogues on dad son bonding irritate and are banal. Do give the audience some credit!
This tedious movie overall gets only a 4 on 10- no- a 3 on 10 since parking at Satyam is a nightmare. So pl don't go unless you love Surya or you like to waste time and money.
********
Saw the DVD of the old series Mind your language- thriving on stereotypes it still is extremely enjoyable and unoffensive. Reading The Final Reckoning by Sam Bourne- very fast and gripping. Not at all like Da Vinci code in terms of the plot and unlike Righteous Men. Awaiting its turn next is the Aravind Adiga book.( Thanks Krishnan)
********

Anush had gobbled up so much pop corn at such speed at the movie that she had a bad bout of throwing up yesterday ( it was her monthly birthday which I had completely forgotten.)

She got introduced to Milly Molly Mandy and see her work on the side bar with a little instruction and the limited sketch pens ( dark and light green) that I gave her.

Today my mother and I went for the first Observation session at Anushka's school. So we were peeping through a one way window at the mezzanine floor watching kids between 3-5 yrs busy, fumbling their way through, some confident, some dong some " work" and others watching and one crying all through.

We watched Anush twiddling her fingers for a few minutes wondering what to do possibly- broke my heart.

She then began following her teacher around - we know she can be clingy especially when physically unwell but I think I need to have a chat on this with Anush and calm her anxiety.

Then the teacher demonstrated polishing a brass vessel and Anush was at her best. Carrying out the steps to the last detail with immense care and patience- she set up her work station- table and mat, she made the little brass lamp shine - taking polish , dabbing, buffing - and put the whole lot of thing back in their designated places once done, washed up and then updated the teacher. I wanted to shout out " Bravo- what a performance" - I had balcony seats after all.

An hour in her school day, while she is recuperating from an illness, may not be representative but it gave me some perspective and the feeling that things are going right at school . Except I may chat with her a little about following the teacher around so much.

Nice work by Anush. As always!
Any luck with the audio link?

awaiting it from my hubby

Yes from reviews I am reading on the net looks like Vaaranam Ayiram does not live up to the hype.
By the way please correct the typo:
It is Aravind Adiga.

It is me again. What is Sam Bourne's book all about ? Thriller on the lines of The Da Vinci Code ?

Thanks Krishnan
that was not a typo that was an ERROR

There was this old lady (in her eighties) who lived upstairs when we lived in London - she gave off *her* childhood copies of Milly Molly Mandy to my kids!

The polka dotted look is great.

And bravo, what a performance, indeed. Kissie to Anush :D

As usual, anush at her artistic best.

Ok. This daughter of yours is giving me too much complex. Even *I* cant color this nicely!
And it does break our hearts when we see our little ones on their own, does nt it? *choking back tears*

chox- wow- that would make them an heirloom of sorts

boo- tell me about it- i felt wretched sending her to school but then i cheered up later once she looked busy and involved...

What a great idea to have this kind of viewing in school.

Do u watch maovies alone with Anush?

i allow anush only certain movies

and conisdering her glowing report card, i dont think you need to worry about Anush at school!