Horrors of many kinds 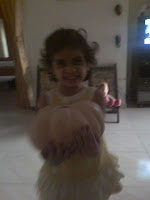 The first time that we will celebrate our version of Halloween.
Step 1- got the pumpkin yesterday.
Anush gleefully picked it up and carried it around saying" See i am very strong!" She has been asking me since morning when we would makes eyes and smile for the pumpkin.
Drona was really an odd movie but it was not as boring as was made out. Navy calls it my die hard allegiance to anything with Abhishek in it.
Saw an unheard of movie Ru ba ru- Randeep Hooda and the heroine is I think the same as Arjun Rampal's wide in Rock on. I thought it was brilliant but for some parts of amateur acting and a morbid end.. Randeep Hooda is the next Irfaan if he gets good roles. Anyone listening?
The Assam violence had left a bad taste. When will all this stop? Rather than be afraid we need to make the best of each day. Who knows where we will be trow....
On to better things- The Hindu's friday review music festival promises a lot of good ear candy. Shubha Mudgal, Shiv Kumar Sharma, Bombay Jayshree, Krishna, etc . Go here to learn more.
Posted by Artnavy at 11:28 AM

Bomb blasts have become so common nowadays that public seems to be apathetic. We can only wish for sanity to prevail.

i love these quick updates you keep doing!!

and i still havent dare see Drona! tho i did see Fashion yest and it was just way too predictable, though the performances hold it together!

wish it was an hour shorter and it would have been a taut tale!

and the omb blasts were totally horrendous!! i wonder when will all this stop?!

really love to open up the computer each morning and see a new script!!
most days I dont know what to comment but it feels to read something new !
keep it going !

Lucky you! Attending the music festival? These festivals are one of the many reasons why I wish I was in Chennai! Esp during Margazhi season! Enjoy....

krish./ mama- yes only wish- can't seem to do anything else about it

whatsina name- yes i am lucky !!

You did manage to see Drona....... hmm. my hubby actually missed seeing "Wednesday" with me to go to an adjacent hall to see "Drona".

ouch that must have hurt him BAD

he must be a matrix/ superman/ bat man fan ??

lucky lucky you guys in chennai!
do you plan to go for any of the concerts then?