A First for me! 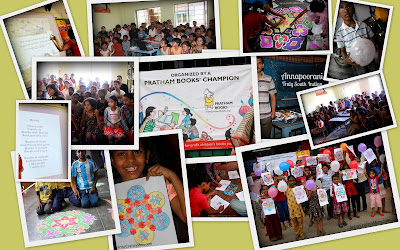 After a bit of warm up with imaginary idlis and chutney and ahaas and ohos, I was their "Sister" telling them a story.

I began the formal session with what literacy and education meant. I had downloaded a couple of poems on what fun and friends books are. The kids fluently read one of the poems along with me. Since it was largely a Tamil crowd it was easy for me to communicate with the little ones as well.

Then the focus moved to the simple and evocative book Susheela’s Kolam .

Given the size of the group, we used a projector for the pdf version. So the kids got to see the pictures clearly and read some of the text with me. The story session was enlivened with questions on teachers and the armed forces, types of kolams and materials used and even maths questions( eg. how many dots in a 9 by 9 kolam)

After this book, we went on to read Laxman’s questions emphasizing the need for curiosity and a questioning spirit.

Post this we had activities, helped by the volunteers, lead by Shruti:
- the younger kids coloured rangoli prints
- the older ones did rangolis ( we dropped the competition idea, all kids were trying hard after all)
- there were also balloons for the kids to do kolams/ drawings on

A huge thanks to the volunteers and trust members who put the event on FB and turned up to help with coordination and art supplies ! Their enthu is contagious.

The snacks were generously sponsored by Annapoorna making it a complete event for the kids there.

There was also pre event coverage in TOI which excited us since Ananda Vidyalaya was mentioned in it.

The photos are courtesy Shruti( Artsy craftsy mom) who has been doing sessions for a few weekends now with this NGO.

I gave the extra books the Pratham Books team had thoughtfully sent and some of my own, making a small start to a library for these deserving kids.

And I also left with a very dear memory of a child calling out to shake hands with me, after I had said a general bye to all.
Posted by Artnavy at 10:22 PM

I missed seeing this in time for the event :-(
I saw the TOI coverage and was super excited for you.