The Chola Trail- I

The Artnavy family headed to Tanjore ( Thanjavur) and Kumbakonam this weekend. We travelled by train to K'konam which was our base and stayed at this really nice resort called Mantra Vepatthur. 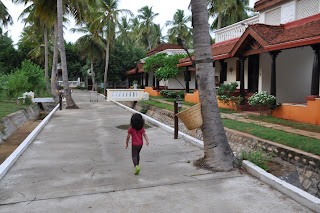 We used a car for our travel there. We spent only two days and hence had to be selective of what we could cover and keep the kids engaged as well.

They are all Unesco sites and their Vimanams tower over the entrance Gopuram.
All the three are gorgeous examples of workmanship and the art historian Fergusson captured it well - when he said of the Cholas that they ‘conceived like giants and finished like jewellers’.


They differ in the later influences that characterise them today. A touch of Vijayanagar here and some blows from some of the non Hindu plunderers there-  all add to the present day character of these monuments which are also active temples. 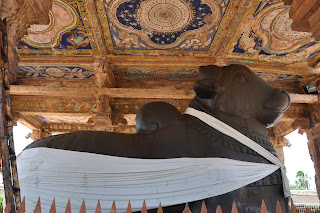 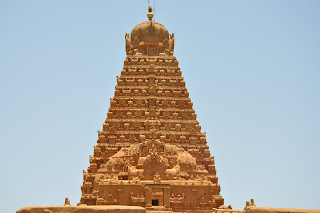 The Brihadeeswarar/ Big temple in Tanjore is indeed BIG. But it was crowded and we had to run across really hot bricks to reach the Nandi and the main sanctum. Felt bad for kids and elderly folks doing this. A complete coir/ jute mat or a grass path would really help.  This place holds a special place for me because of the huge Nandi ( now under restoration) which remains one of my strongest childhood memories since I spent the first 4 years of my life in Tanjore. We visited the kindergarten school I went to - more on that later. 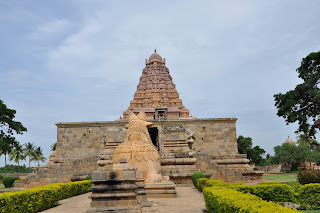 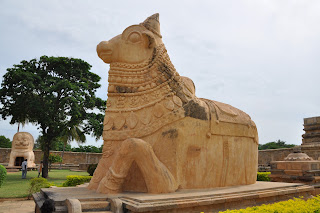 Gangaikondacholapuram is well maintained, though it is in an obscure village. The name is derived from the King who built this- he was the one to victoriously conquer lands upto the Ganges. The Gopuram is a bit shorter and the decorative tiers more rounded than the Big Temple. The Nandi's head is a bit small for the body and not in black stone unlike the other two temples. What excited the girls most was the bird life there- it is as mesmerising as the temple itself. 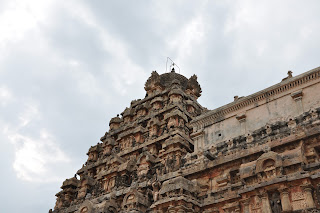 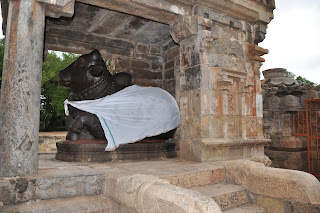 Darasuram/ Dharasuram was what we liked the most and it helped to have a good guide in Dorai ( 09944312150). The temple offered glimpses of Konark, of oil lamps of yore and symmetrical pillars. There was a food deity where the crown and the vessels were hollow ( in stone) while the rest of the statue- i.e. the body sounded full. We saw a miniature Ganesha and Shiva with much detailing. Even the Nandi here is smaller but prettier.

These three were enough to make the trip worthwhile. But I will  share what else we did in a while.
Posted by Artnavy at 10:18 AM