The weekend saw the Artnavy family's first own two wheeler join the family.

Art and Navy's romance, courtship and first year of marriage was enabled by borrowed scooters and bikes from all and willing sundry- the canteen panditji on campus to a most generous cousin with an MP registration bike in Chennai.

We moved on to cars but I always loved the odd ride we got once in a while on a two wheeler.

More recently, during the wait for the Ertiga when the previous car was given off in exchange, another benevolent friend lent us his scooter. The girls just loved their outings on it.

Soon it was our wedding anniversary and I knew just what I wanted to gift Navy. But it looked like a significant investment to just buy and surprise him.

I told Navy about it and it was sheer serendipity that less than five minutes later, we chanced upon two auto shows on TV  which featured the two wheeler that had caught my fancy.

We went ahead and here it is: 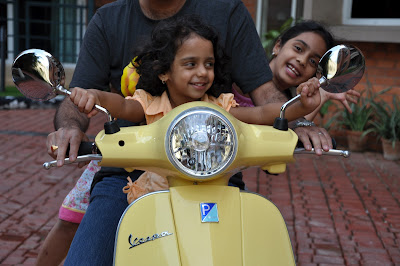 What is not to love?
Touchwood.
Posted by Artnavy at 9:00 AM

they look sooo happy in it!

Meena- yes indeed. They dont want to get off and find the car boring/ too old now!!

Oh wow!! This is total awesomeness!! I used to love riding my dad's Bajaj Super. I so want to ride it again!!!