Life in the Art Lane 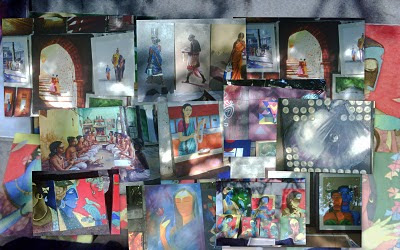 It was a wonderful walk down art street for us yesterday at the Chitra Santhe.

We set out early to avoid the traffic and crowd. It was so energising. Some of the work was interesting but amateurish, some embarrassingly poor and some wonderful stuff which I would have bought if I had enough wall and wallet. 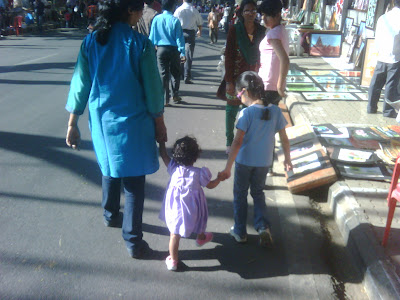 Even Aditi went " Wow" in her usual style but only at select works - so maybe she has her reasons. :-)

A couple of Anushka's priceless observations:
One of the more indulgent artists asked her if she liked painting, to which she replied yes. Then he said maybe she would display there one day. She blushed and later whispered to me that she would give her art for free . She would not charge for it. Because she did not want people to "waste money". Then we got into a discussion on art as a means of livelihood and so on.

Her greatest worry was what would happen if bird shit landed on the paintings? Would the artist be able to clean it....would it affect the painting...this led to a discussion on medium - water vs oils and so on...whatever little I knew that is

Wanted to go so much but could not make it.:( Maybe next time. A friend had put up a stall, though.

:) how cute!!!
lil P drove me crazy.. poor kid, she hated the crowded streets. [ we went post lunch ]
i bought a pattachitra painting

Sob, we missed it this time. With you on the wall and wallet factor!

I am glad that the kids enjoyed the day too.. What a beautiful way to spend the day !

Always love what Anush's point of view on things..:)

A big berry-type of thing did fall on one of the paintings we were admiring btw. Did make me wonder about other stuff falling on it.

Interesting...is this exhibition or this lane always sells artsy stuff is it?

Lavs
Chitra Santhe is an annual one day event held in Kumarakripa road from 7 am to 9 pm in blore- look up the site- pretty nice...

MM
did not buy anything

sandhya
wish i had known...

starry
u had such a fun weekend anyway

suhasini
indeed it was