Here in Velachery, Chennai, Lets do something and Kreeda had organised a workshop for kids - the event planned to introduce children to ancient Indian games from across the country. Anush was very very reluctant from the start and when she saw the empty workshop room she refused to participate. But she was sharp enough to ask us to buy the games so that she could play at home!! We refused saying she could have them once she learnt it from the aunty.

Even Uma's ( of Adya fame) entry did nothing to encourage her to try out the games. I wish they had had a huge floor snakes and ladders where kids can walk and play. Something to arrest a diffident and timid Anush... well... anyway after trying a little to coax her we left.

Briefly Anush was enticed by the very kind manager of the place with some cool board games and also left her mark on the wall by placing a hand print in blue- the first blue hand since most kids opt for red followed by green.

While on Blue, the film by that name,was aired on TV yesterday on colours!! Could not stand more than 10 minutes of it.

My father, rather Anushka's doting thaathu rather, attended Bookaroo and has procured books for his darling. More on those when they get unveiled on our visit to Delhi.

Here are some pics of Bookaroo, which remind me of Dakshin Chitra and Kalakshetra put together 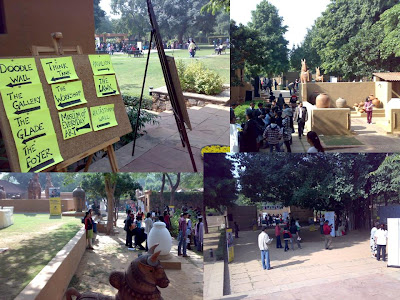 I also cud not stand "Blue".
Kids are so moody. On Saturday was my office picnic & Ansh did not want to play with anyone.

I also cud not stand "Blue".
Kids are so moody. On Saturday was my office picnic & Ansh did not want to play with anyone.

I wish I could peek into my child's brain occasionally but then I'm sure I would hate it if someone did that to me :)

i'd have done what you did. hate pushing my kids to do something they don't want to take part in.

would've loved to go to bookaroo!

and blue makes me think of ruskin's bond's blue umbrella :)

I was half expecting Adya to react the same way. But she did try every game there though she didn't complete any of them. The coconut shell was fun!

Same case with Baby. We had gone to this Story trails' activities. She refused to get out of my lap, though the brat enjoyed to the hilt. I didn't push her, at least she was observing things and enjoying in her own way. You should do this Story trails with them, Anush will love it.

subha- we have been on the animal trail- which one were u on?