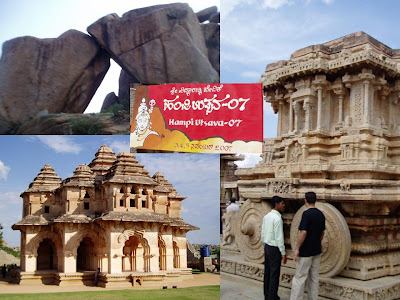 Finally we went to Hampi!!
And Anush's vocab now includes- Water Fountain, Tungabadhra, Hampi, Hospet, Pig, Ruins, Shall we get down? Rail gaadi. . . .

While I should update on the travel blog , since hardly anyone seems to visit there or leave comments, I thought I would post it right here.

We took a train to Bangalore and then the connecting overnight train( Hampi Express) to Hospet and parked at Hotel Malligai, a very comfortable modern option.

The car hired at the hotel took us to Hampi about 10 kms away. An English speaking guide walked us through the ruins and there were so many anecdotes that he had to offer.

The area is split into Hampi and Vijaynagara. Apart from Krishna Deva Raya the religious claim to fame is that Kishkinda was somewhere in the vicinity. You need to be prepared for a lot of walking even if you have a vehicle to take you up to a point.

Being the Hampi festival time there were lots of people and stages put up and concerts in progress, apart from a light and sound show on Karnataka history.

Hampi is awe inspiring from the lofty rocks that balance so easily to the chariot which has wheels that move.

Virupaksha Temple houses Shiva and Parvati- Pampadevi. It is next to Madurai in terms of the Gopuram height and a must see is the pin hole camera kind of inverted shadow. Also the three headed Nandi.

Hampi Bazar All the roads adjoining important sites form this and being the festival time it was crowded more with Rajsthani wares than those from Karnataka.

Vittala Temple is under renovation but it speaks of a glorious past. It has intriguing musical pillars and many mythical creatures. Interesting was the blue print on stone - a mini replica at the base of the main structure. Also the stone chariot which has wheels that move has been plastered now.

Queens' Zanana houses the Lotus Mahal with its ingenious AC system and is beautifully laid out. There is also a lovely pool a short distance away as also elephant stables.

The Hazara Ram temple with 3 versions of the Ramayan in sculpture is a treat.

A lot of foreign traders specially from Islamic countries have left an impact in terms of the architecture which is often a combination of Indo-Islamic styles in the administrative and residential segments.

One experience that we missed was a coracle ride on the Tungabhadra as it began to rain by the time we got there.

A must is the Mango Tree- a quaint restaurant with stone step seating under a grand old mango tree. The seating is such that if you are careless the small food table may land on the next customer's head. But the pasta was awesome as was the view.

Back near Hospet is the Tungabhadra dam and the musical fountain - a treat for little kids- begins at 7pm.

We also caught a Kannada movie- Milana -on day 2- some culture trip this.
HAPPY DIWALI!!
Posted by Artnavy at 1:49 PM

We are planning a trip to Hampi sometime in December and your post will be of great help. Always wanted to visit Hampi as I am fascinated with Vijayanagara empire. Happy Deepavali to you, Anush and your husband.

Hi Artnavy. That is one fabulous travel blog that you have there! So mich information and all so very well written. I have book marked it and will visit it for ideas :-) Please do update it whenever you get time. You've got one loyal reader and am sure there are many more 'silent' ones... waiting to delurk.

Thats one more in my list of places to see. Will check your travel blog too.
Happy Deepavali.

That is a good post. I have visited Hampi years ago as a kid. And have vague memories and lot of photos. A few years back in Houston the Kannada Vrinda organized a series of seminars about the Vijayanagar empire bringing historians from around the world to talk about Vijayanagar empire. And I feel in love with Hampi all over again. I just want to go there. And especially fascinating to me is the Virupaksha Temple. I have no idea why I love it so much, the name I guess. Do you have any pics of the temple? I do hope during our next trip to India we can fit in a few days to visit Hampi.
Thanks for the lovely post

ArtNavy,
I envy your trips :)
But still I am sure Anush must be enjoying all this and probably a kind of 'educational trips' I guess :)
Wish you and your family a very Happy Diwali.

Good post. :-) I do visit your travel blog, but am more regular here, I admit.

We've been planning to visit Hampi for ages, but somehow nothing's materialised till date.

Happy Diwali to you, Anush and Navy!:-)

That looked like one great trip :)
Happy Deepavali to you guys :)

BTW, do you understand Kannada?

Anush is certainly getting a learnign experience through these cultural trips. Hampi is beautiful!
By the way Happy Diwali to you and your family Art!hope you had lots of fun.

how do u manage this with a kiddo? I have even forgotten what it is to watch a full movie at home!

Hi! My name is Project 71. Weird name I know, but my masters are weird too. My masters apologize for such an out-of-context comment and they know how painful such spamlike comments are. But, say masters, how else are we to present something good to the world. By that they mean me :D. Kindly see what I am about. Won't take you more than 22s to read... http://www.project71.com/readme Enjoyy!

thanks all and wish you a very happy diwali

Hampi is real cultural heritage! when I visited the place, I just felt ashamed at the human greed which has got it into ruins today...

yay.. so u did hampi at last. :) great to hear. shanti restaurant (italian :p) also is awesome.. hope u tried that as well. mango tree was good too.
do u remember my hampi collage.. u asked me to blog it i think :).. damn it feels like 10 yrs ago.